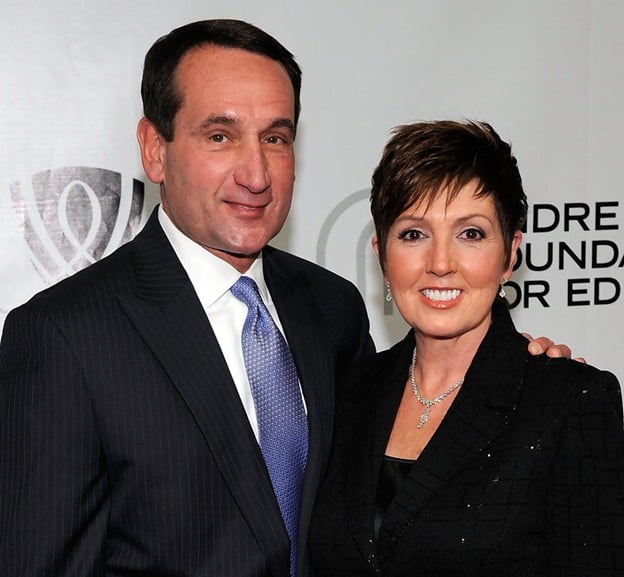 He started his coaching career as an assistant coach for Coach Bob Knight for the Indiana Hoosiers.

Mike met the former Carol Marsh, known as Mickie when he was home on break from West Point and she was working out of Chicago as a stewardess for United Airlines. They went out on a date to a Chicago Bears football game, and he somehow told her that she had been his third choice after two others turned him down.

“I had never known someone who could be so honest and so blatantly stupid,” Carol Krzyzewski said. “I was thinking, How can this guy be so dumb?”

The couple tied the knot on his graduation day on June 4th, 1969, in the academy’s Catholic chapel at West Point. He was dressed in his Army “blues,” a formal uniform he’d become eligible to wear only a few hours earlier when he graduated as an officer. They have three adult daughters: Debbie, Lindy and Jamie, and eight grandchildren. On their 35th anniversary in June of 2004, coach Mike and his wife renewed their wedding vows at Duke Chapel.

Mike Krzyzewski’s interactive/feminine qualities of leadership may be partly innate, but to a large extent, he learned them from his family. He said:

“There’s an empathetic part of leadership, and this is where my wife and my daughters have had a huge impact on me. Guys don’t share insights. If a guy does, we call him a blowhard or a know-it-all, so we don’t do it.”

Carol Krzyzewski and her famous husband also established the Krzyzewski Family Scholarship Endowment, which provides $100,000 in scholarships for Duke students from North and South Carolina.