This lovely girl is Penny Oleksiak; according to some sources, she could be dating Canadian/ Israeli tennis player Denis Shapovalov. The 19-year-old athlete who defeated the great French tennis star Jo Wilfried Tsonga at the 2017 US Open.

Born on April 15, 1999, in Tel Aviv, Israel, Denis, recently added Tsonga’s name to the list of athletes he has defeated in his career; he defeated Juan Martin del Potro and Rafa Nadal at the 2017 Canadian Open.

6’0″Shapolalov, is the son of tennis coach Tessa Shapovalova who still is his coach. He was still a baby when his family moved to Canada from Israel; at age 5,  his mum started teaching him tennis.

His rumored girlfriend Penny Oleksiak, has been cheering for him in the stands, seating next to no other than her momma in-law; some people think these two are just friends, but just in case let us tell you what we know about the lovely Penny. 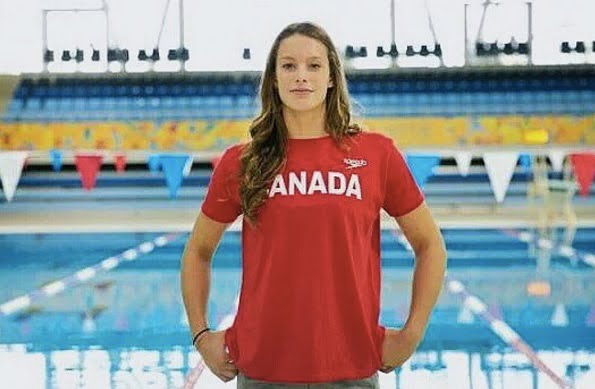 Penny Oleksiak was born on June 13, 2000, In Toronto, Canada; to Richard Oleksiak, Alison Oleksiak, also the proud parents of  Jake, Claire, Hailey and Jamie who is a professional NHL player with the Dallas Stars.

Penny started swimming at the age of 5, she also took up dancing and gymnastics; however, it was swimming that she stick up to. Oleaksiak, won six medals at the 2015 FINA World Junior Swimming Championships; four medals at the 2016 Summer Olympics in Rio, Brazil