Dianna Russini is a pretty  reporter for ESPN!!

ESPN reporter Dianna Russini  found herself in the middle of a nasty Twitter comments posted by Jessica McCloughan the wife of Scot McCloughan who is General manager of the Washington Redskins, she apologized afterwards, but we all know once it gets on the internet it never really disappears, the damaged was done.. Heroes what Mrs. McCloughan  tweeted about Dianna Russini.

Mrs. McCloughan suggested Dianna Russini offered people blow jobs as payment for the info she used on her stories.. Yikes!! 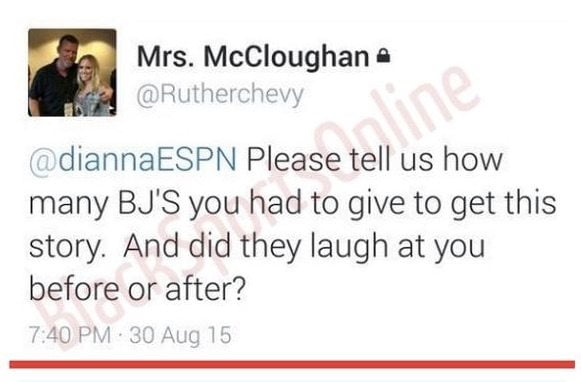 “I deeply apologize for the disparaging remarks about an ESPN reporter on my personal Twitter account,” the statement obtained by ProFootball Talk read. “The comment was unfounded and inappropriate, and I have the utmost respect for both the reporter and ESPN. I regret that my actions have brought undeserved negative attention to the (Washington) organization and its leadership. My comments in no way reflect the opinions or attitudes of the organization and I regret that my behavior has in any way negatively impacted the team and its loyal fan base.”

And then ESPN defended Diana when they responded with their own statement.

“Dianna is an excellent reporter who should never have to be subjected to such vulgar comments,” the network said. “We are obviously extremely disappointed by today’s developments.”

Read about the lovely Dianna Russini from her biography below!

32-year-old Diana Marie Russini was born February 11, 1983 in Norwood, New Jersey. She graduated in 2005 with a Bachelor  of arts and journalism from George Mason University; while she was still n college she was student sideline reporter with Comcast Sportsbet Bethesda, then in 2007 became a reporter with News 12 Westchester/ Hudson Valley.

In 2007 WNBC hired her to be their Bureau Chief/ Reporter, came back to Comcast Sportsbet Northwest as reporter and Host in 2009, two years after that News 12 Long Island hired her as a freelance anchor and Sports reporter, that same year NBC 30 introduced Dianna Russini to be their new Sports anchor.

She has been a sports anchor and Reporter for WRC Channel 4 since May, 2013. On May 18, 2015 WRC announced Dianna Russini was leaving them to take a position as a sportsCenter Anchor for ESPN.