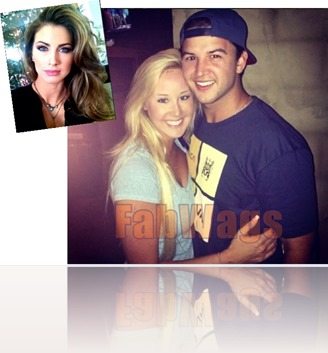 “I am not engaged yet, but we are still dating” those were Katherine Webb’s words when she was questioned about a possible engagement, if A. J McCarron did indeed cheated on her with Maxim girl Margaret Wood, I am afraid there were be no wedding or relationship to comment about.

According to Margaret Wood who spoke to exclusively she spend the night with A.J McCarron at his Tuscaloosa home on Saturday, Wood and A,J have known each other  for years even before he met the former Splash contestant.

“We were hanging out at his house, and I had been drinking, so he didn’t want me to drive. I did not stay at a hotel. That’s all I can say. I’m trying to be careful about what I say because I feel really bad.”

“I’ve known AJ for a long time. He asked for my number back in the fall when I was on the sidelines at the Ole Miss-Alabama game. I didn’t even know who he was. I had no idea he was even talking to Katherine. I thought he was cute.”

Margaret said she only found out A.J and Katherine were dating until Webb was seen at his game and was Brent Musburger’s object of attraction, although Wood said he nothing to tell her about after all they are just friends.

Margaret Woods has been dating new Yankee Aaron Judge, until recently when she also reconnected with A.J..

“I was having a really bad day,” she says. “The guy I was dating, Aaron Judge, who just got drafted for the Yankees, and I had just broken up. My connecting flight to Memphis was cancelled so I was drinking in Tuscaloosa. with some friends and AJ met up with us.

“We went out and we just hung out, it wasn’t a big deal. We were hanging out at his house, and I had been drinking, so he didn’t want me to drive,” Margaret says. “I did not stay at a hotel. That’s all I can say. I’m trying to be careful about what I say because I feel really bad.

“It’s his business, and he should be able to do what he wants to do. He was texting me this morning about the story coming out, and I was like, ‘I don’t know what to tell Katherine,’” Margaret told Radar. “I don’t know her personally, but I would tell her, ‘I’ve known him longer than you. We’re just friends and it’s not a big deal’.

“If I need to tell Katherine, I will call her. The last thing I wanted was to cause any drama. This all makes me looks like some hooch and I’ve known AJ for a long time.” 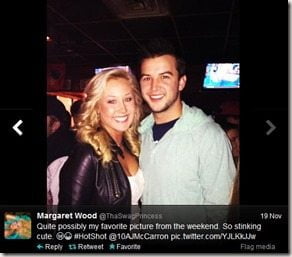 Margaret insist she and McCarron are just good friends.. 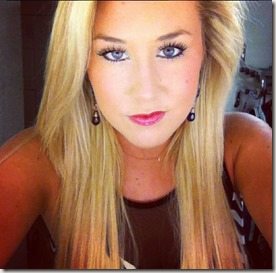 21-year-old Margaret Wood from Pontotoc, Mississippi was born on March 26, 1992 to Brenda and Gregory Wood, her 34-26-35 measures fits perfectly in her 5’9” frame. Margaret wood is currently attending at the University of Mississippi, her favorite sports team at the St. Louis Cardinals.

Some of her jobs as a model include posing for Playboy on November, 2011, she was part of Playboy’s 2012 College girls issue, she was also featured in Angels Playpen Magazine, Rebel Game Time Magazine Swimsuit Edition 2012, Prime Time Atlanta Magazine. She was also finalist at the July, 2012 Miss Caribbean Tan Bikini Contest Finalist in Memphis,TN.