Buffalo Bill and Buffalo Sabres owners Kim and Terry Pegula are the proud parents of Jessica Pegula; Jessica is the American tennis player from Buffalo, New York, currently ranking in the #62 place in the ATP world singles rankings. Jessica Pegula isn’t single; it seems that she is dating her longtime boyfriend, Taylor Gahagen.

As noted, Jessica is one of three children born to Terry Pegula and his wife Kim, both are owners of Pegula Sports and Entertainment, the company that owns not only the Buffalo Bills but also the Buffalo Sabres (NHL), Buffalo Bandits (NLL), Rochester Americans (AHL), Rochester Knighthawks (National Lacrosse League. 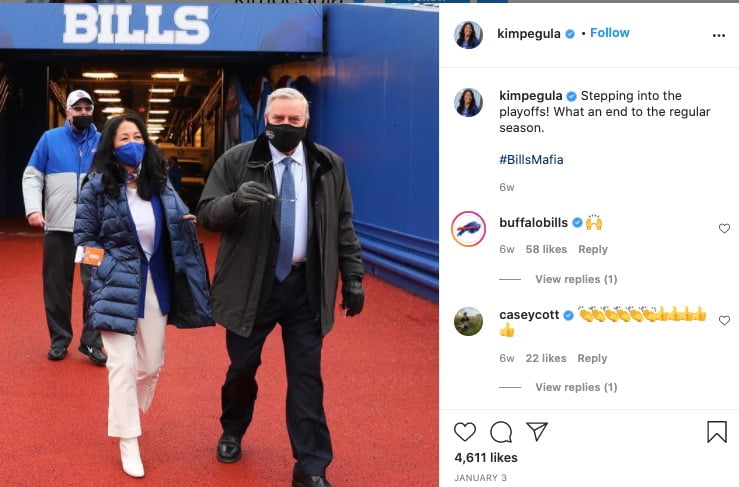 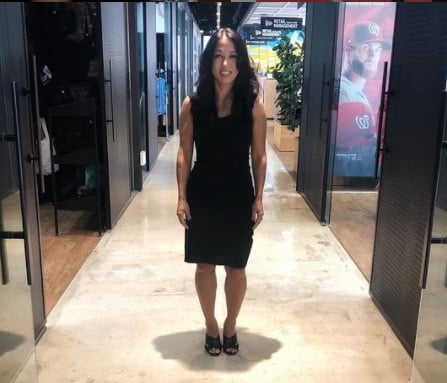 Jessica’s momma was born on June 7, 1969, in Seoul, South Korea; Kim was brought to the United States as a little girl and was later adopted by Marilyn and Ralph Kerr on December 30, 1974. In 1991, while she was attending Houghton College in New York, she met her husband Terry Pegula, who was eating at a restaurant where she was interviewing for a waitressing job.

“When I first met him, he had no furniture in his house,” Kim said. “It wasn’t like I thought we had a big future ahead of us.”

Kim didn’t get the restaurant’s job, but got a job at Mr. Pegula’s natural gas company East Resources instead; they soon started dating, and by 1993, they were married. Mr. Pegula and Kim welcomed three children, Jessica, Kelly, and Michael; in addition to their children, Terry Pegula is the proud father to Laura and Matthew Pegula, born from a previous marriage. 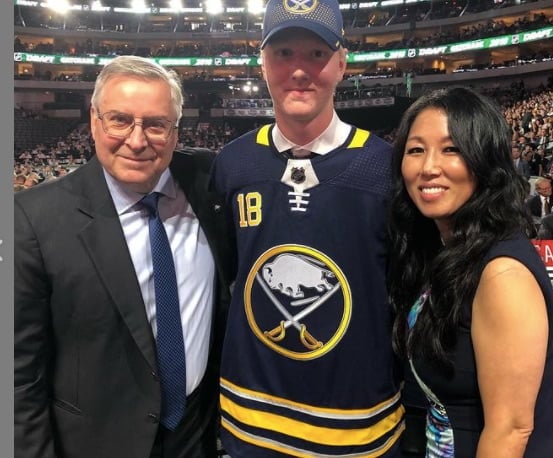 Jessica Pegula’s dad Tery was born Terrence Michael Pewgula on March 27, 1951, in Carbondale, Pennsylvania. He attended Scranton Preparatory School and graduated with a bachelor of science in petroleum and a natural gas engineering degree from Penn State University.

Mr. Pegula worked for Getty Oil before he founded East Resources in 1983; he sold most of East Resources to Royal Dutch Shell for $4.7 billion in 2010 and to American Energy Partners for $1.7 billion four years later; Mr. Pegula holds some of the assets thanks to his ownership pf Greater Rocky Mountain Oil & Gas in Wyoming and Colorado.

Terry bought the Buffalo Sabres along with the Buffalo Bandits in February 2011 from Larry Quinn and Tom Golisano for $189 million. He also acquired the Sabres’ former  AHL affiliate team, the Rochester Americans, in June 2011.

In September 2014, his bidding bid won the purchase of the Buffalo Bills from its founder Ralph Wilson for $1.4 billion. Mr. Wilson Jr. was the last living founder of the American Football League when he died at the 95 on March 25, 2014.

Mr. Pegula subsequently purchased the National Women’s Hockey League team, the Buffalo Beauts on December 21, 2017, and the Rochester Knighthawks of the National Lacrosse League in 2019. 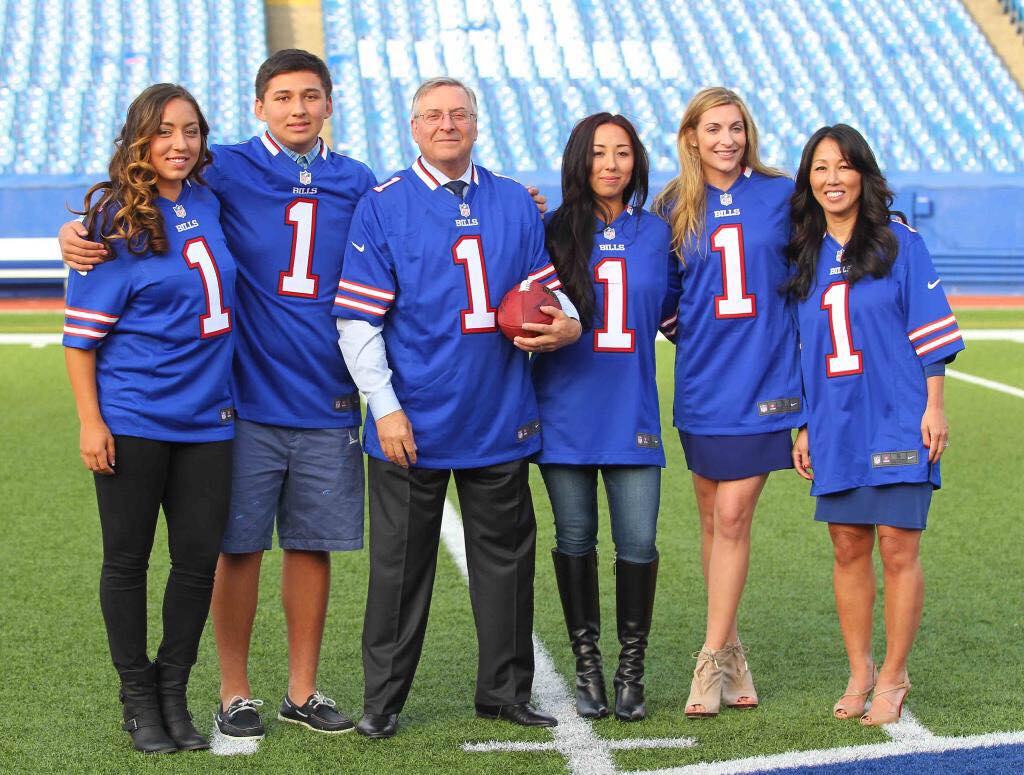 As we previously told you, Jessica Pegula has two siblings Kelly and Michael, and two half-siblings, Laura and Matthew, from his father’s first marriage to Linda Rochez. Jessica is close to all her siblings, but her pretty sister is also her business partner. We will tell everything we know about the Pegula children below.

Kelly Pegula who looks a lot like her momma Kim is a businesswoman, singer, and clothing designer. Kelly graduated from Penn State University with a bachelor of science in organization and professional communications in 2020.

She is the creative associate of The Healthy Scratch, the quick-service restaurant she opened along with Jessica in the summer of 2016, and the owner and designer behind the  One Buffalo brand. 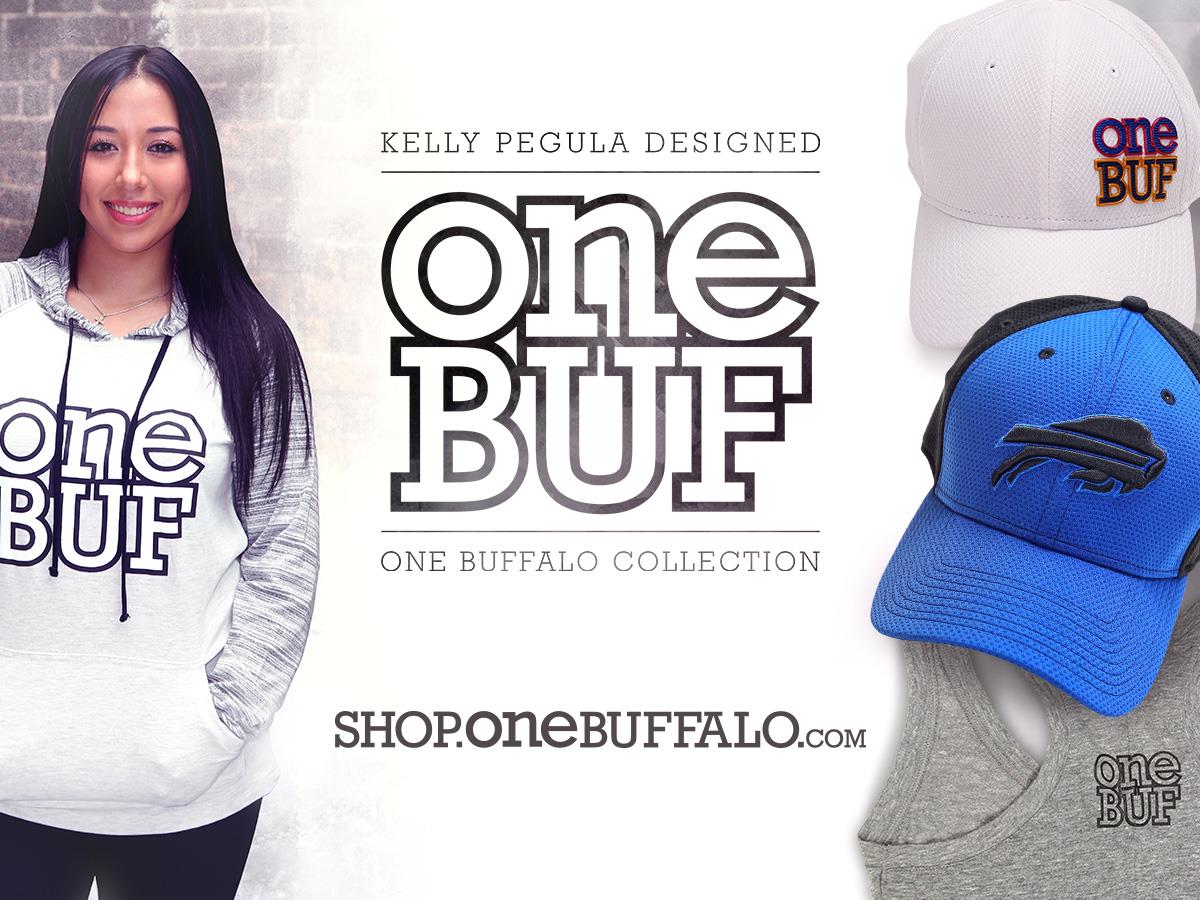 “Kelly and I have been deeply inspired by our parents’ success in a large number of business ventures,” Jessie Pegula said. “Their hard work, passion and success has inspired us to pursue our own endeavor. We believe that a healthy diet has an overwhelming impact on your quality of life. We want to share our passion with our customers and help everyone to lead a healthy lifestyle.”

Some of you probably remember Kelly offered a reward to whoever finds her Shiba Inu pup Yoshi in May 2017; luckily, she found Yoshi a day later by herself. 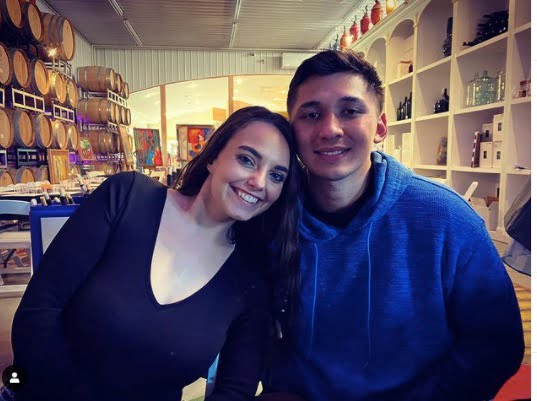 Not much is out there about Terry and Kim Pegula’s youngest child Matthew Pegula; so far, we know that he will graduate in 2021 from Syracuse University and that he isn’t single, he and his girlfriend Emily Smith have been dating since March 2016. 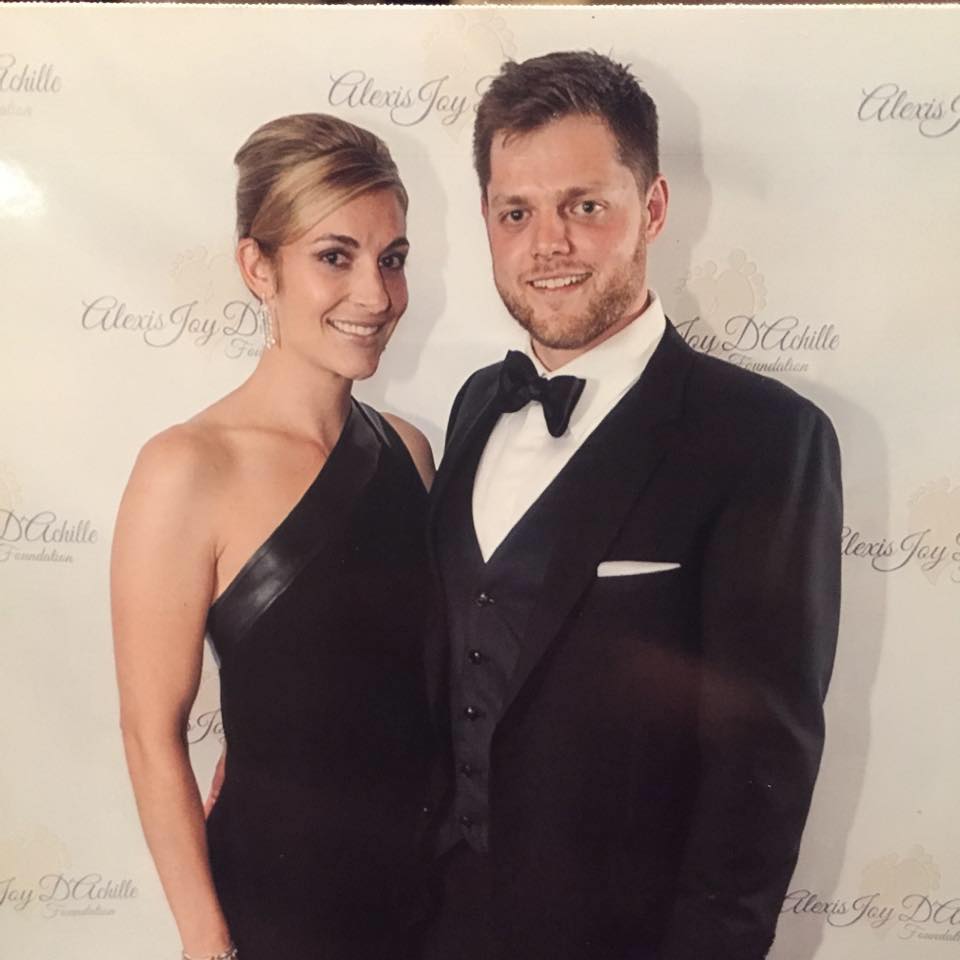 Laura Pegula, now Laura Pegula Biesinger, was born on June 18, 1982, to Terry Pegula and first wife Linda; Laura attended North Allegheny Senior High School and the University of Pittsburgh with a degree in geology. Laura was the manager of geology at East Resources. She and her husband own a restaurant; they live in Wexford, Pennsylvania. 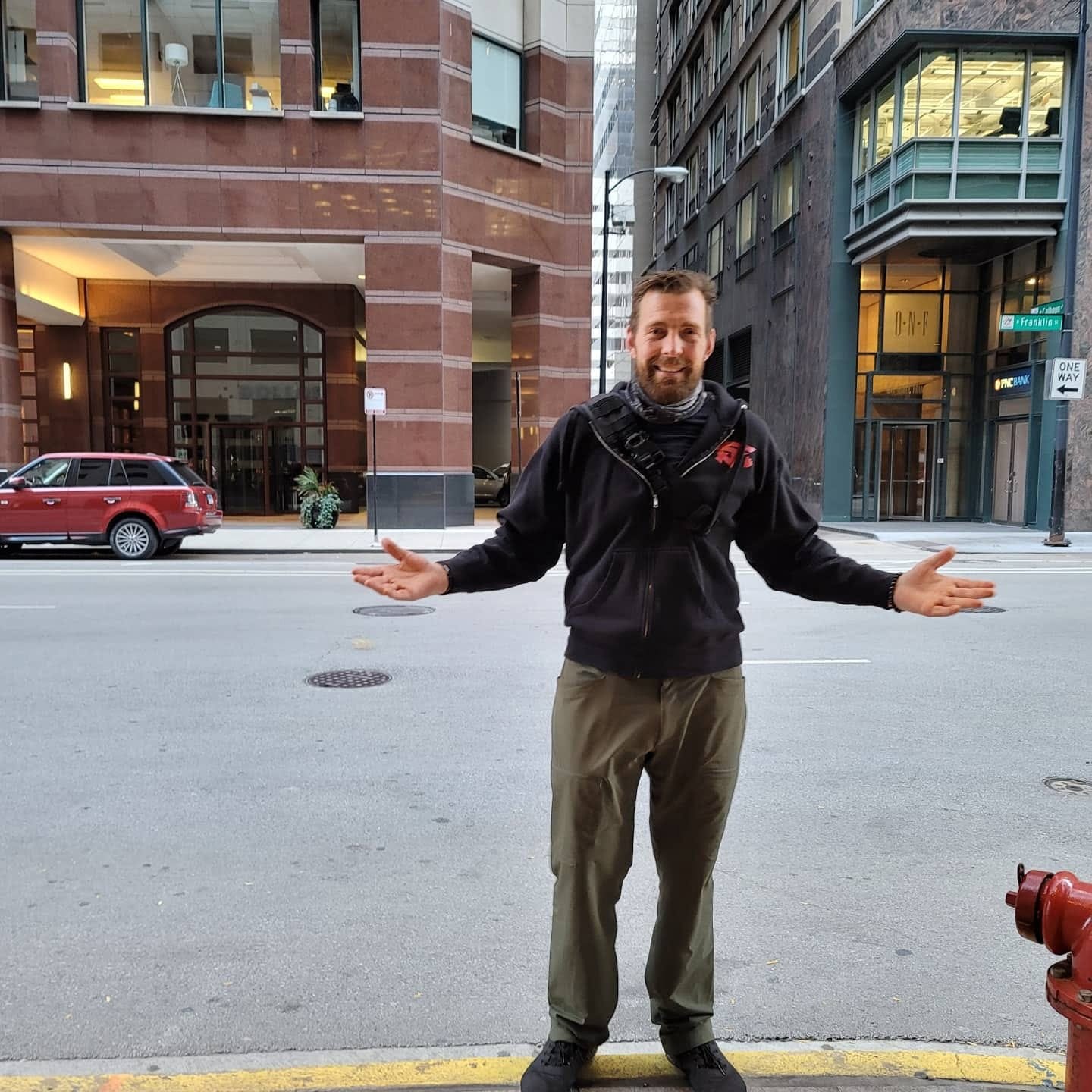 Michael Pegula, born on September 11, 1978, is the eldest son of Terry Pegula and ex-wife Linda; he graduated in 1996 from Orchard Park High School and in 2003 with a Bachelor of Science degree in engineering from Antelope Valley College. Between 1997 and 2002, Michael Pegula was a helicopter Crew chief with the United States Marine Corps.

Although his father is a billionaire, Michael started from the bottom. Back in 2004, he was a janitor. He later was the warehouse floor manager for Warehouse Operative, worked in data for the Nestle Corporation, and was billing clerk and account receivable for A-1Home Health Services.

In February 2008, was the president of Orchid Home Health Services, in 2016 opened Full Strenght Fitness at the L. A Kings Valley Ice Center; later coached the hockey team; the  California Heat; in 2017 was the defensive coach for the USC Ice Hockey team. He continued coaching hockey at UC Irvine in 2019, the California Golden Bears (dryland coach); since May 2020, Michael Pegula has been the co-host of the Good Morning Korriban Podcast.

Michael,  his wife, and four children reside in Los Angeles.

Forbes Magazine estimated the Pegula family’s net worth at $5.1 billion in February 2021; his fortune started thanks to his oil and natural gas company. Terry Pegula ranked $129 in Forbes 400’s 39th annual ranking of America’s richest people and landed on the #330 placed in Forbes’ World’s billionaires list in 2020. 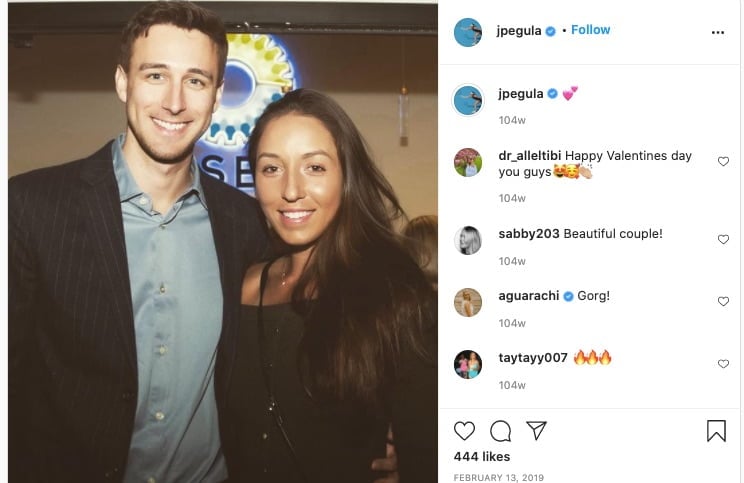 Jessica Pegula is not only dating Taylor Gahagen, but she is also engaged to him, according to their wedding registry, but they also planned to tie the knot on October 23rd, 2020; however, we couldn’t find anything about their wedding and the last of Jessica’s photos with Taylor are from July 2020. 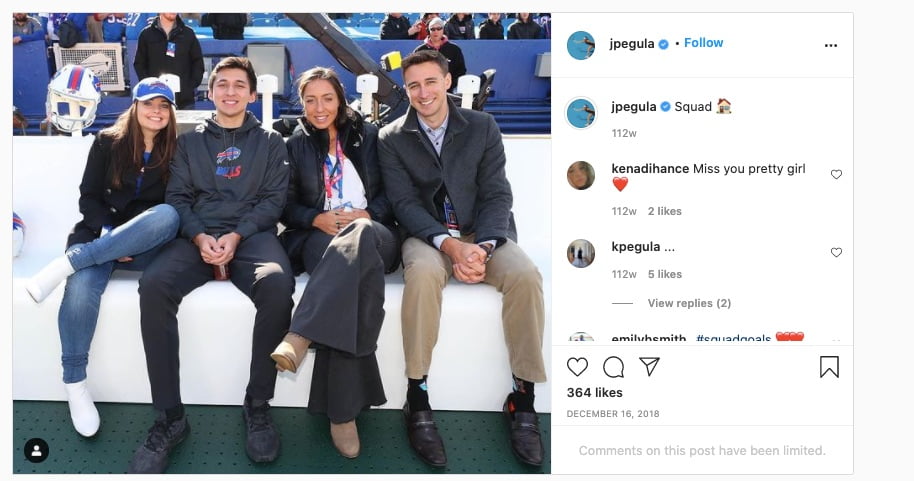 Either dating, married, betrothed, or no longer together, let us tell you that Taylor Gahagen graduated from the State University of New York at Fredonia with a Bachelor of Science in Business Administration. He also holds a master of business administration from Canisius.  College. Taylor, a senior investment analyst doe EAM, started his career doing marketing for the Upstate in 2011; he later worked in market development for Ingram Micro in 2013.

Sometime later joined Pegula Sports and Entertainment first in the Buffalo Sabres’s marketing department, later was named Director of Brand and Strategy and Development and Director of Corporate Development in 2017. He left Pegula in 2020.