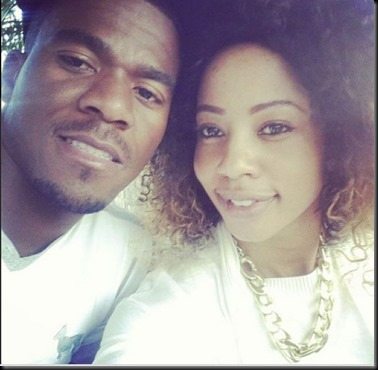 Meet Mandisa Meyiwa and pop singer Kelly Khumalo, the first lady was the wife of South African and Orlando Pirates Goalkeeper Senzo Meyiwa and the second was  his mistress. Senzo was shot dead in Johannesburg, he was 27.

Senzo’s wife is Mandisa Meyiwa formerly known as Mandisa Mkhize, she graduated from Bophelo Impilo Private School in Johannesburg, South Africa. She then attended Ridge Park College and received her HRM diploma and degree in Business administration from Durban Institute of Technology in 2008.

Mandisa worked as a call agent at Nedbank  between 2006 and 2009, in July, 2009 she was named HR Officer. For a while the life of Mandisa was complete, she was hapily married to the man of her dreams, but soon  the happiness began to fade away in March, 2013 when a college of her told her to look into the instagram account owned by pop singer Kelly Khumalo. What she found was tear her apart..

“When I saw pictures of them looking cosy I got the shock of my life. I was heartbroken and cried hysterically. I called Senzo and told him to respect me as a wife but he denied he was having an affair with Kelly.”

Senzo admitted he was love struck by Kelly when he first saw her  on television..

“I was in Cape Town in March last year when the national team and I was watching the Feather Awards with my teammate Daine Klate,” said the 26-year-old keeper.

“When I was watching I saw my homegirl (Rhythm City actress) Lucia Mthiyane with Kelly Khumalo, who was wearing a long red dress.

“I couldn’t take my eyes off her – I was attracted to her immediately. I phoned Lucia straight away and asked her to hook me up. She was hesitant at first but she called Kelly for permission and then gave me her details.”

Plus, he  admitted he lied to both,  his wife Mandisa and mistress Kelly who was at the time pregnant with his child.

Kelly is a good woman. She is not the reason for my marriage falling apart,” the Pirates Keeper confessed to Sunday World. “This is all my fault. I lied to them [Khumalo and Mkhize].

“I approached her [Khumalo] and she asked if I was married. But I wasn’t man enough to tell her the truth. As a result, she fell in love with me.

Things between the two women got heated when Mandisa accused Kelly of attacking her..

After things cool off, Senzo asked for forgiveness, he also said he and Kelly decided to called it quit.

“Senzo came to me in October last year, apologising for hurting me,” Mandisa explained.

“It wasn’t easy at first to forgive him. I went for counselling and my family and the elders at church were very supportive. Their words of wisdom helped me to become stronger day by day.

“Eventually I let the pain go because I realized he had made a mistake and was showing remorse. I agreed to give it a second try.”

“Kelly and I made a decision to stop the relationship because we realized that we were hurting the people close to us, and I love my wife.”

It isn’t certain when Senzo  and Mandisa split up, but as soon as that happened he was back with former mistress now girlfriend Kelly Khumalo who had given birth to the couple’s daughter Thingo.

Senzo was at his girlfriend’s house when he was killed.