Pablo Carreño Busta is the handsome Tennis professional, currently ranked World No. 19. The Spaniard who’s been making a name for himself since turning pro in 2009, recently stunned at the U.S. Open.

The Gijon, Spain native, advanced to his second Grand Slam quarter-final on Sunday in New York as he crushed Denis Shapovalov’s dream run in the US Open fourth round.

Pablo Carreño Busta is enjoying a career-best season at the age of 26. The Spanish right-hander has established himself in the Top 20 of the Emirates ATP Rankings, courtesy of winning his third ATP World Tour title in Estoril.

Other highlights in his career include, finishing runner-up in Rio de Janeiro, making the semi-finals in Indian Wells and reaching his first major quarter-final at Roland Garros.

Carreño Busta was born in Gijón to parents Alfonso and Maria Antonia. He grew up, the only brother to two sisters, Lucia and Alicia. 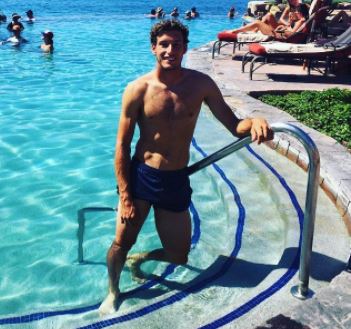 Pablo who began playing tennis at age 6, currently has three career singles titles. He made his ATP World Tour debut in 2011 in Barcelona. He underwent surgery in 2012 due to a herniated disc that kept him from the game for 7 months.

He returned in 2013, earning ATP’s Most Improved Player of The Year after he climbed 650 positions in the rankings from the previous year. That same year he broke into the Top 100.

In 2014, Carreno competed in all four Grand Slams for the first time, cracking the Top 50 by the end of that year. He finished 2016 in the Top 30 and –recorded his best-ever Grand Slam performance at Roland Garros earlier this summer.

The blonde/smiley player seems to be on an upward trajectory, however the same can’t be said about his personal life. Though Pablo seems to enjoy his social lifestyle, he also seems to be fully concentrated in his career, leaving little room for a romance.

As of now, is unclear whether he is in a relationship or not. Check him out on Instagram here.