This lovely lady is Mrs. Sarah Feuerborn Harbaugh; pretty wife of coach Jim Harbaugh, the head coach for the Michigan Wolverines at the University of Michigan; before joining the Wolverines, coach Harbaugh served as head coach for the San Francisco 49ers. He faced his brother John, coach for the Ravens, at the Super Bowl XLVII on February 3, 2013.

Coach Jim Harbaugh was born on December 23, 1963, in Toledo, Ohio, where his father, Jack Harbaugh, was working as an assistant coach at Perrysburg High School. 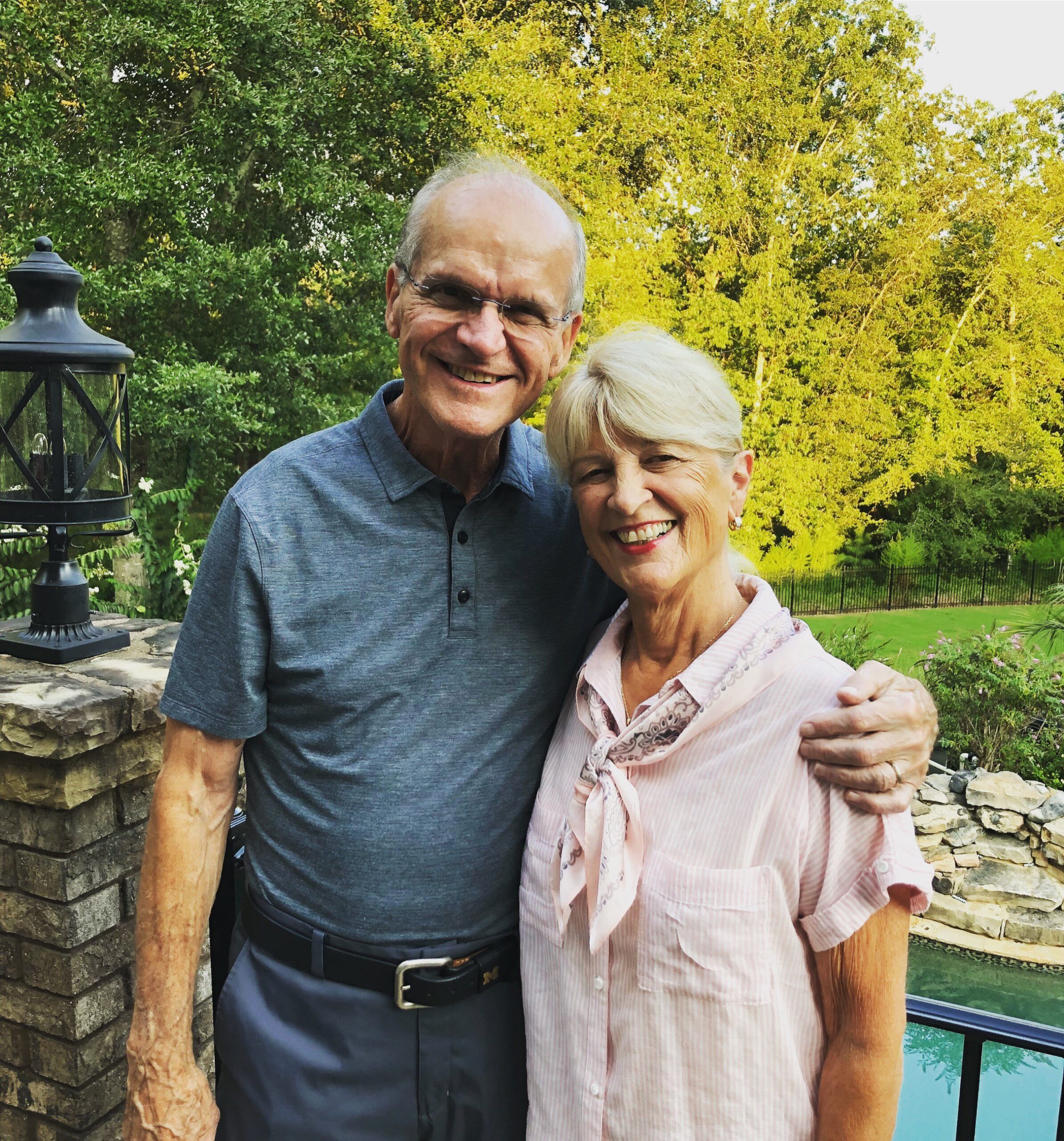 His father, Jack Harbaugh, was born on June 28, 1939, in Crestline, Ohio, to William Avon Harbaughand Everlyn (nee. Fisher) Harbaugh. Before coaching, Jack Harbaugh played college football and baseball at Bowling Green. He later played for the Tennessee titans in 1961.

Later on, he coached at Standford (DC), Western Michigan (HC), Pittsburgh (), Western Kentucky (HC), San Diego (RB), and retired after the 2009 season at Standford as their running back coach. 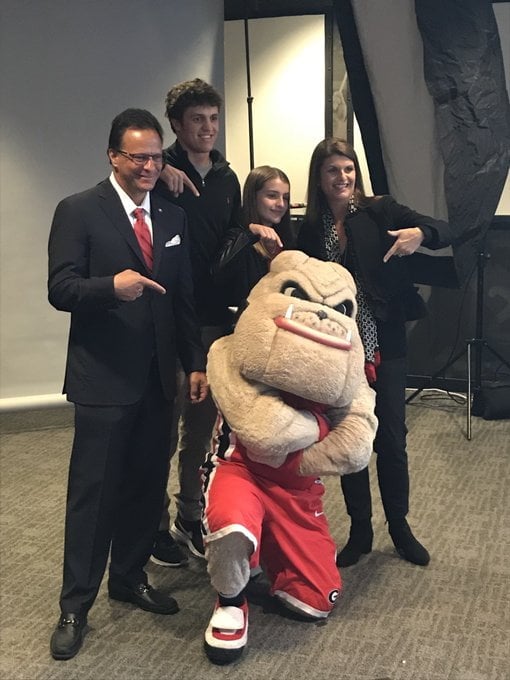 Like his old man before him, Jim Harbarg also played football before becoming a coach. Jim played college football with the Michigan Wolverines before the Chicago Bears selected him in the first round (26th overall) during the 1987 NFL draft.

His awards in the NFL include:

According to Celebrity Net Worth. College football coach Jim Harbaugh has a net worth estimated at $35 million.

Jim Harbaugh’s current salary is $7.5 million with the Michigan Wolverines. His annual salary is $550,000, plus $2 million of a life insurance policy and $5 million in additional compensation. Coach Harbaugh agreed to a four-year contract extension through the 2025 season on January 8, 2021. 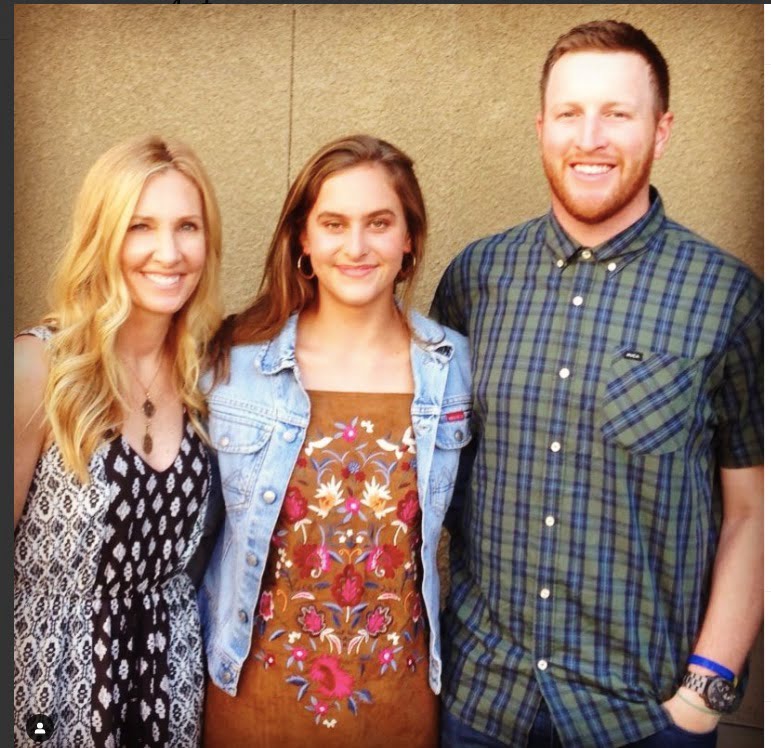 If you have followed Coach Harbaugh’s life, you probably know that he has been married twice; Jim Harbaugh’s ex-wife is 55-year-old Miah Harbaugh, born Miah Lee Burke on August 25, 1966; she is the mother of his oldest children Jay, James, and Grace Harbaugh. 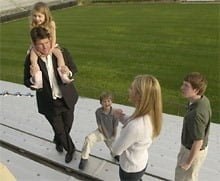 Jim and Miah Burke Harbaugh got married in 1996 and divorced while coaching in San Diego in 2006; she moved to Coronado, Cali, and the children lived with her. Miah later moved to Malvern, PA., and subsequently to New Jersey. 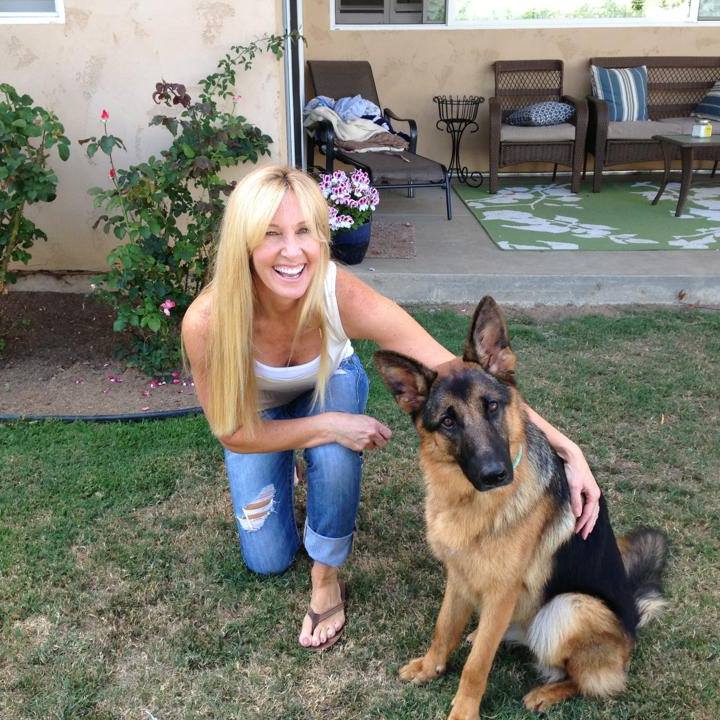 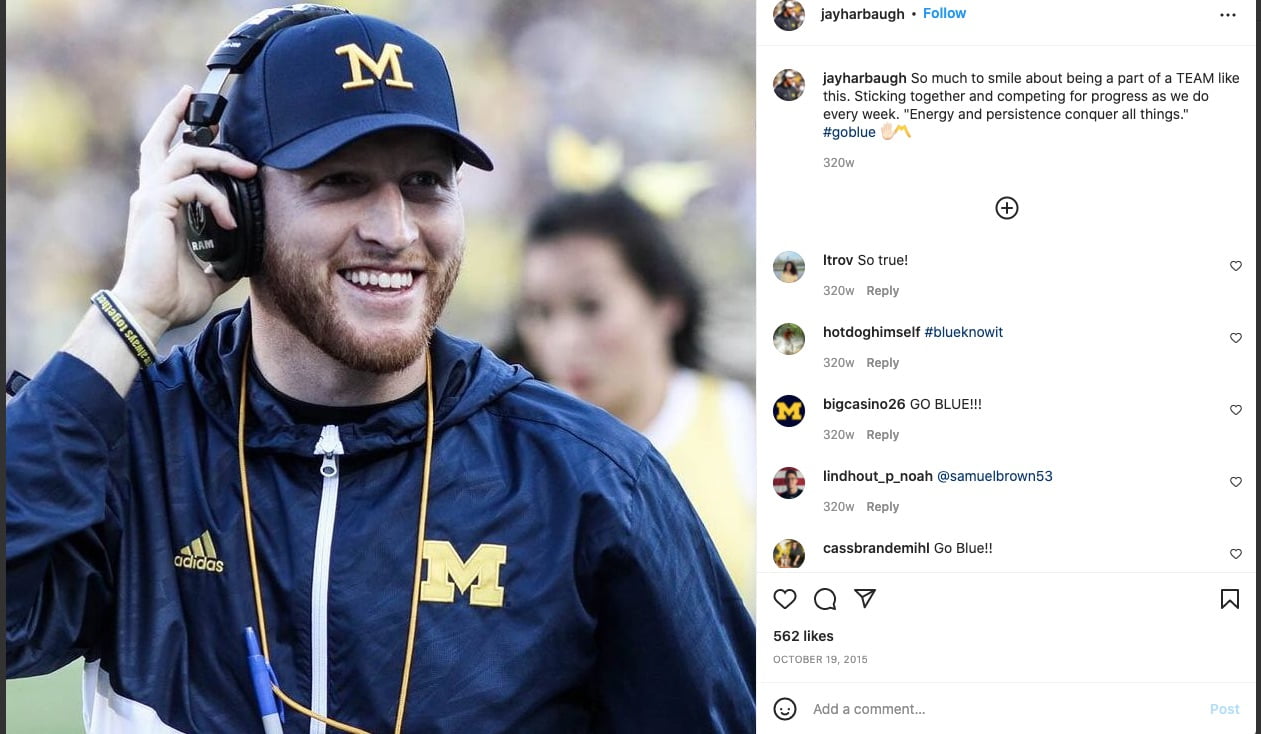 Jay Harbaugh, the son of Jim and Miah Harbaugh, was born on June 14, 1989, in San Diego, California. Jay graduated from Oregon State University, where he started his coaching career as an undergraduate assistant for Mike Riley from 2008 to 2011.

He joined his uncle Jon Harbaugh and the Baltimore Ravens in 2012 as their offensive quality control coach; Jim was on the coaching staff when the Ravens defeated the 49ers at Super Bowl XLVII. 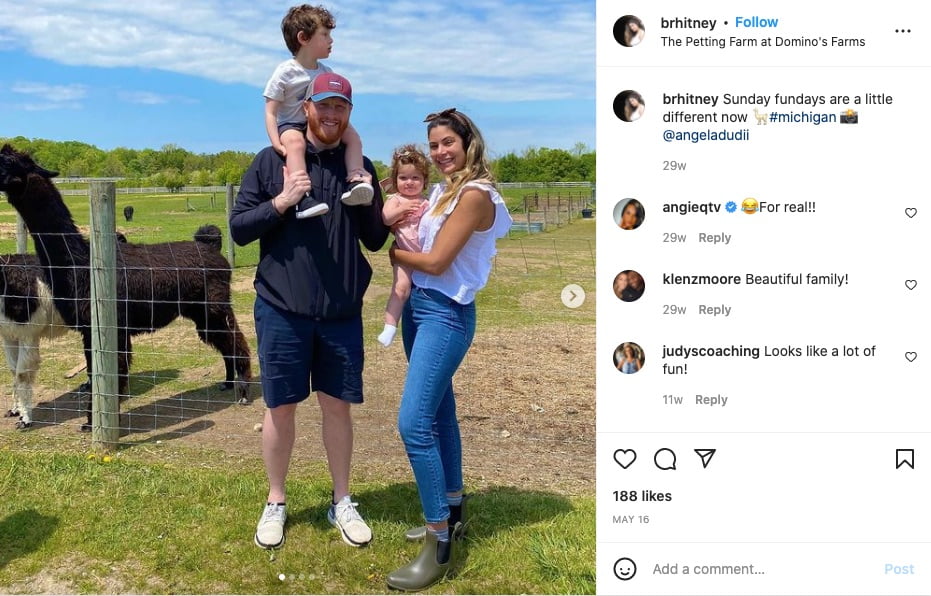 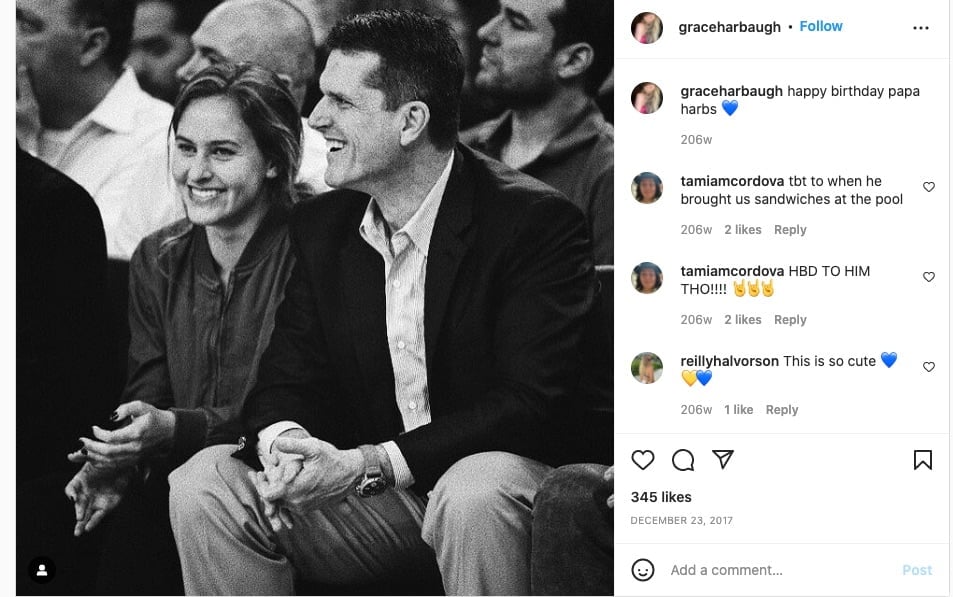 Pretty Grace Harbaugh was born Jesica Grace Harbaugh on June 27, 2000, in San Diego. She graduated from  Coronado High School in 2019 and is now attending the University of Michigan. She is pursuing a Bachelor of Arts in Criticism, History, and Conservation and is a Wolverines Women’s Water Polo team member. 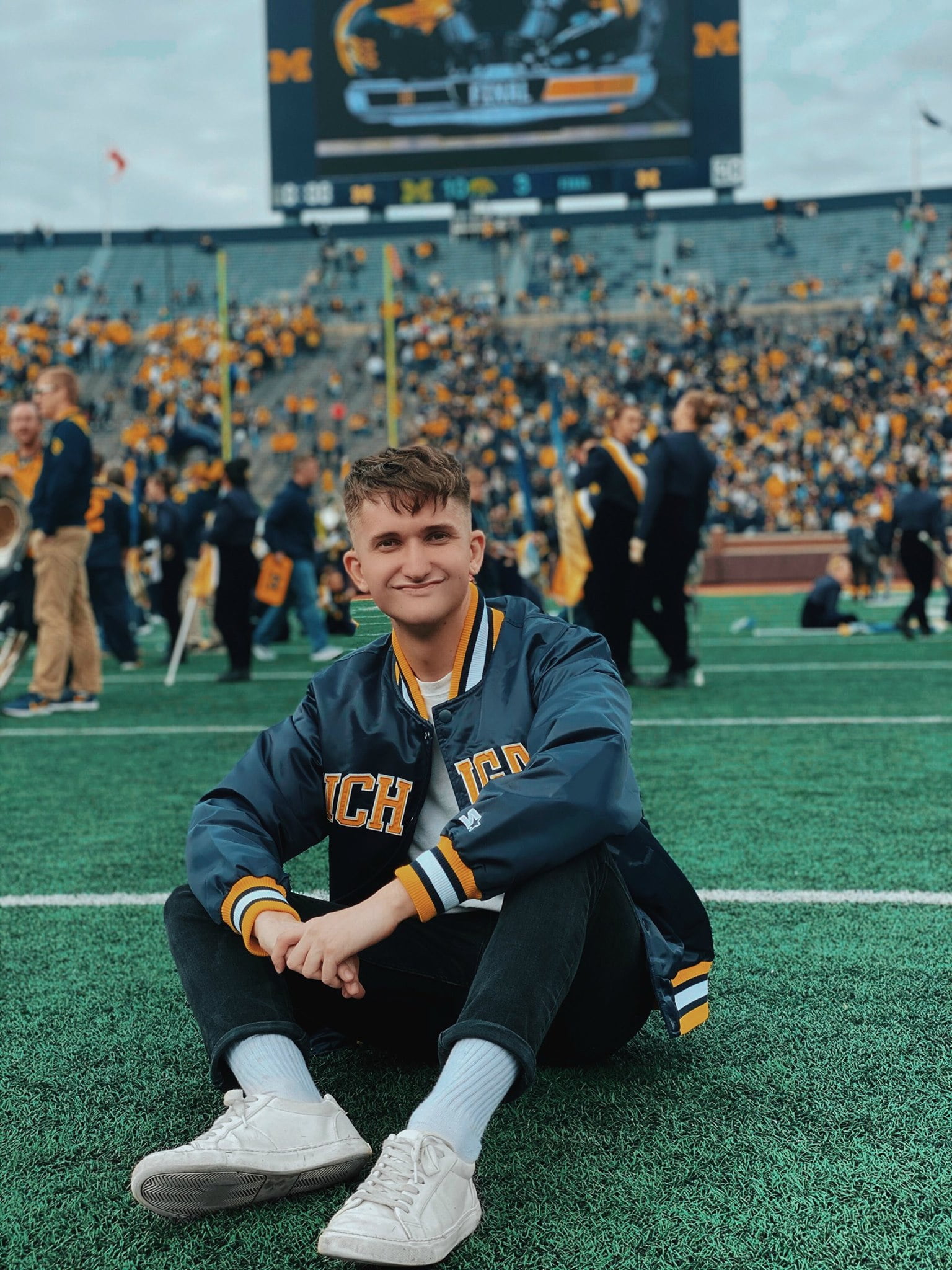 Jim and Miah’s son James who came out to his father during Donald Trump’s presidential election graduated in August 2019 from the University of Michigan with a Bachelor of Fine Arts in Directing; James Harbaugh is a Visual Merchandiser & Community Engagement Specialist at Lush Fresh Handmade Cosmetics North America. 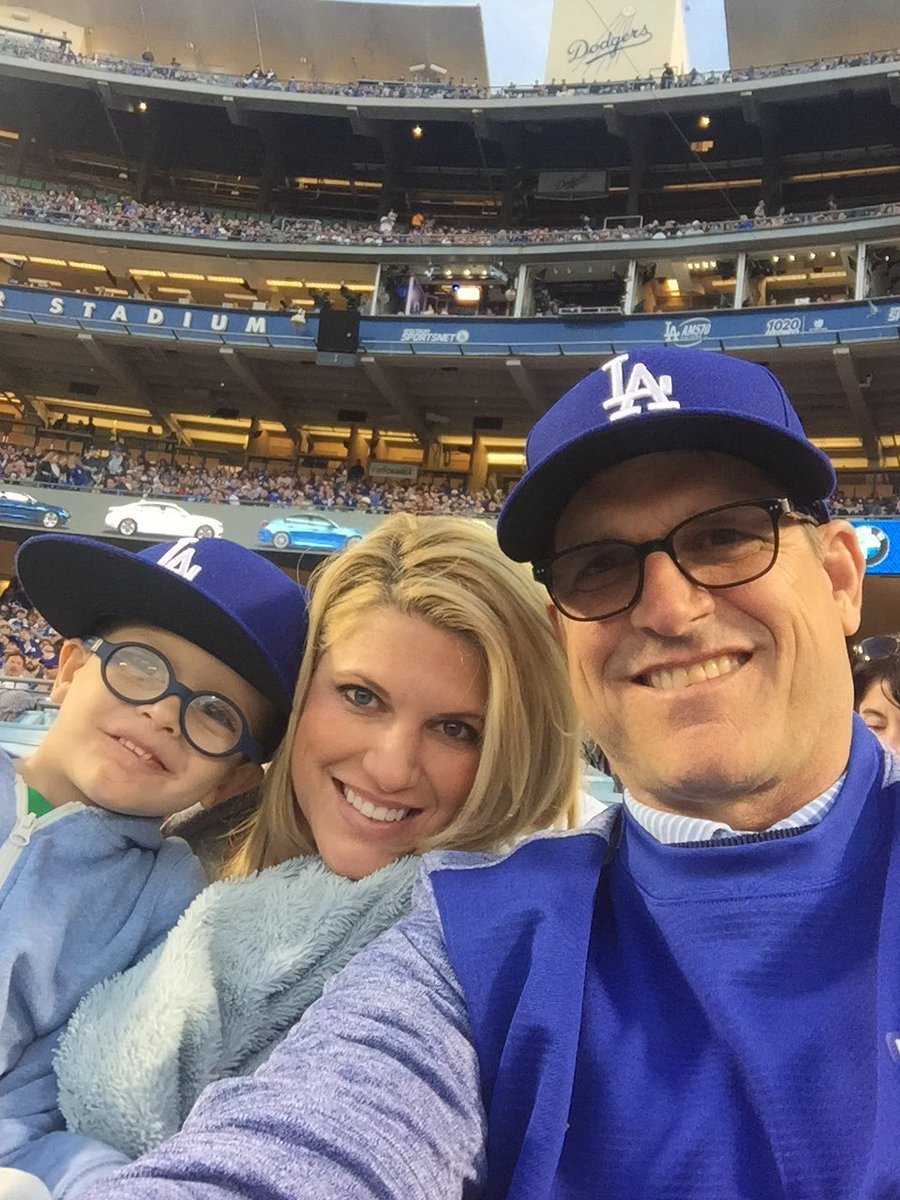 In 2006 Jim was at a PF Chang’s parking lot in Las Vegas when he met his second wife, 34-year-old Sarah Feuerborn, she was living in Sin City, and he was about to start his new job as head coach at Stanford University. 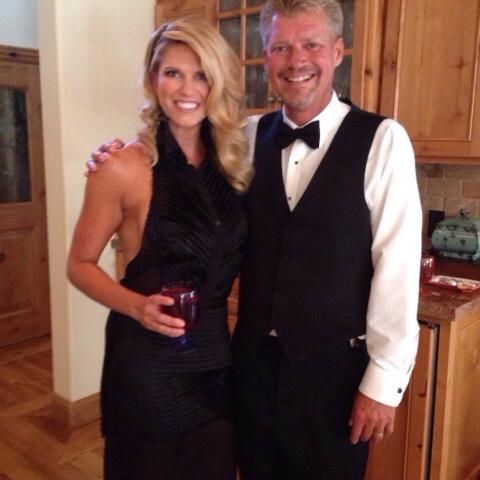 She got married to her hubby/coach on January 5, 2008.  They have four children together; Addison, Katherine, Jack Jr., born in September 2012, and John Harbaugh, born in January 2017.