Croatian Ivo Karlovic – who stands a towering 6ft 11in tall – has smashed down 136 aces in his first four matches at this year’s tournament so far to top the service charts, the Mirror says.

Karlovic has now sent down 9,749 aces in his career in 515 matches. Two years ago he became the second-oldest champion to the Claro Open Colombia in Bogotá with a 6-3, 7-6 (4) victory over Alejandro Falla. It was his fifth career singles title and first since 2008.

Alsi herself is tiny compared to her astounding man, her height is not exactly known but you can tell by their photos. She is described as a Chinese-American woman of Jamaican origin (her father is Chinese and mother Jamaican). 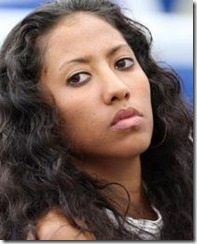 The couple have been married for 10-years and together for over a decade!

In early 2013 Alsi had to call 911 when her hubby woke up with his arm numb and unable to speak. Karlovic needed four days in the intensive care unit of a Miami hospital before he could remember his name, and five days for the numbness in his right arm and face to subside. His severe headaches stopped after 10 days, helped by strong pain medications.

It might have seemed simplest for Karlovic to retire from competitive tennis after his illness. His ranking had slipped out of the top 100 even before his hospitalization; he was 34, elderly by professional tennis standards.

But Karlovic, who reached a career high of No. 14 in 2008 and who has beaten Lleyton Hewitt and Roger Federer when they were No. 1, wanted to hang around.

Alsi and her man tied the knot on 29 March 2005. Six-years into their marriage the couple welcomed, their first child, Jada Valentina, born in September 2011.

He has said about his marriage: “My marriage was like a lucky charm for me, it was like an anchor that I needed so badly,”

She doesn’t seem to be into social networking, but you can find her hubby on Twitter here.