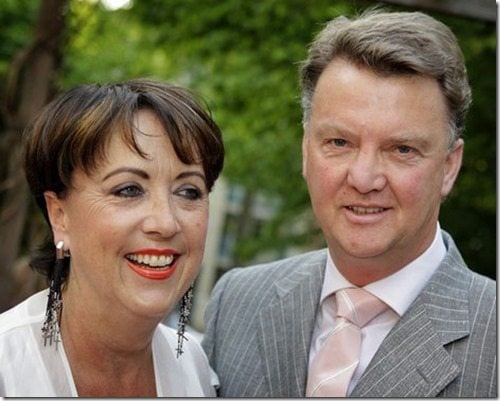 Meet Dutch lady, Truus Van Gaal, the lovely wife of 62-year-old Dutch national football team manager, Louis Van Gaal; her husband is on the verge of becoming the next Manchester United’s manager but she is not too far along, achievements wise; earlier this month Truus van Gaal received a royal decoration and was made ​​a Knight in the Order of Orange Nassau. She was awarded during  the Tenth Gala Muscles Muscles, April 5th at Hotels van Oranje where her hubby is also an ambassador for children with muscular dystrophy.

According to the Daily Mail, her hubby has the pedigree to replace David Moyes at Manchester United and even more, the backing of Robin van Persie.

Born in 1954 Truus is Van Gaal’s second wife, on his 2009 autobiography; her husband talks about his career up to that point; he tells a part that includes his relationship with Ronald Koeman and Johan Cruyff, his deceased first wife Fernanda with whom he fathered two daughters, his second wife and what he feels for the club for which he worked. On the two volume biography he also talks about his ideas about football and the profession of trainer-coach. 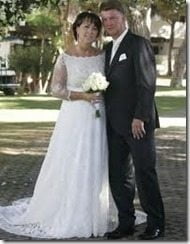 She and the former midfielder have been married since 2008. Van Gaal and Opmeer met at the 1994 World Cup in Orlando in the United States , after six months of Gaals first wife Fernanda died from the effects of cancer.

Hilda Opmeer is generally best known as the charming life partner Louis van Gaal . Truusje – As Louis affectionately calles her, comes from South Rotterdam , itself at RVS Insurance and Nationale Nederlanden which worked twenty-seven years, the last twelve years in the function of main events at Nationale Nederlanden . Hilda had a sober look at football, is a Feyenoord fan at heart , but also find a very nice club AZ . She is regularly asked how well Louis is at home and if she can not advise regarding the love-hate relationship with the media it.

The couple tied the knot on the manager’s birthday, when he turned 57-years-old, as far as the wedding it was a small ceremony with about 60 friends and relatives. If you are fluent in Dutch, you can read an interview done to her here.