You are here: Home / Archives for Kyle Farmer gitrlfriend courtney 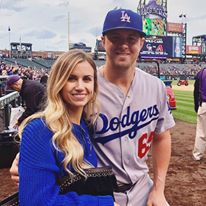 Courtney Sayre Courtney Sayre is the stunning girlfriend of MLB player Kyle Farmer. Her stud is a  catcher for the Los Angeles Dodgers. Prior to being drafted by the Dodgers, Kyle played college baseball at the University of Georgia. Farmer an Atlanta native appeared as a young quarterback in the 2009 film The Blind Side, alongside […]