You are here: Home / Archives for Yasiel Puig daughter 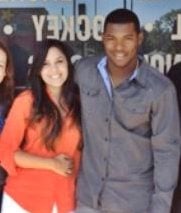 Nicole Chaves Yasiel Puig the Cuban outfielder with Los Angeles Dodgers has become one of the best players in the MLB, he is nominated at the 2013 ESPYS so we wonder who will be his date for the evening? Some people told us Puig is dating a curvy brunette named Nicole Chaves. According to some […]