Mari Vilches is the lovely soccer wag currently in a relationship with soccer star, Gerard Deulofeu. Her soccer stud is currently a forward for FC Barcelona and the Spain national team.

Two years later in 2014, he debuted for the national team. Gerard joined FC Barcelona’s youth academy in 2003 at the age of nine. He joined Barcelona’s senior club in 2011 and played on loan with Everton, Sevilla and Milan before he returned to Barcelona last June.

Aside from being a soccer star for Barcelona, the 23-year-old player also leads a busy family life. At home he is also the boyfriend of Mari Vilches and daddy to their adorable baby daughter. 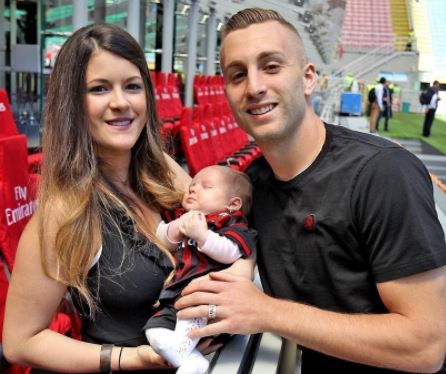 Last December Gerard announced via Twitter, his girlfriend, Mari was pregnant with the couple’s first bundle of joy. The two have been seeing each other for years. In 2015 it was reported Mari and Gerard shared a home in Manchester. They are allegedly engaged.

Born Mari Vilches Valle on June 18, 1992; unlike most wags, she enjoys a low profile. The new mom is active on social media however her Instagram account is set to the private setting.

We do know she likes to change her look from time to time. We’ve seen her go from blonde, to brunette to blonde again and she rocks every style.

She is mostly seen on Gerard’s IG page. Mari who speaks Catalan, Spanish and English is also an animal lover. The couple owns two dogs, Sherry and Lucas.