The British media stared the rumors that the forward Manchester United player Javier Hernandez ‘Chicharito ’ was  enjoying a romantic dinner last September but not with his longtime GF, but with an 18 years old actress Chaska Borek .

On 2011 Rumors said than ‘Chicharito’ arrived to Atlanta, USA. And with him an 18 years old girl named Chaska Borek.

“Chicharito” keeps the relationship with Lety Sahagun, despite the fact that European media involves him in a romance with an English actress named Chaska Borek, they mention to media that their relationship is better and better,” they chat every day by Blackberry”, said a couple closer friend.

But who are these girls?

First we have Leticia Sahagun, Chicharito’s official girlfriend; she comes from one of the most prestigious and conservative families in Jalisco. 23-year-old Lety Sahagun was born Leticia Sahagun in Guadalajara, Mexico to Lety Acevedo de Sahagun and Jaime Sahagun..

Ms. Sahagun has one sister Renata and two brothers Rodrigo, Jaime and Renata Sahagun. She studied at the Centro Escolar Los Altos in Zapopan, Guadalajara the school is known for its Opus Dei beliefs. She then moved to Nuevo Leon where she is studied International relations at  Monterrey Tec. Lety has been dating the famous young Manchester United player since 2008.

Lety is one of the hosts on E! Latin News, along with Renato Lopez, Patricia Zavala.

Lety has graced the pages of Hola Magazine.

Here is a little Biography of Lety Sahagun in her own words..

I’m Lety Sahagun, Mexican , Host at E! Entertainment and a blogger since a few days. I’m one of those girls that know a little of everything, but much about nothing. Adrenaline junkie. Insatiable fighter to save the world, I live to eat breakfast, eat some more and then eat dinner. Overthinker. I am afraid of time, I believe in faeries, I’m addicted to nuts and all the nut family. I’m a music devotee, literature and movies. Professional ring collector.

I worry about the banality and paradoxes of the world I live. My hands speak for me and sweat nonstop. This is my blog. Here I put what moves me, inspires, annoys or love. It’s a little bit of where I come from, to where I’m going and inbetweens.Thanks for reading

And then comes the other lady linked to Chicharito, Chaska Borek

Chaska Borek is of  an Irish, Scottish and Canadian heritage from her mother’s side and American from her Hawaiian father. Chaska Borek is a vegetarian, and studies at  Cambridge University, she also likes to dance, and she participated in plays and ballet and swimming championships. She speaks  German, English and French fluently. 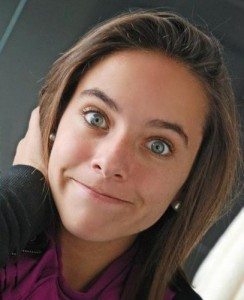 British tabloids said that Borek and the Mexican Manchester United player ‘Chicharito’ went to the Globe restaurant in England, and ask no to interrupt them. At the end of the evening, the couple walked out the back door. Even if Borek denied having a Facebook account, following comment was “missing him…Wish I was in Mexico”. Making reference to the Mexican soccer player. While Javier Hernandez was at that time playing in Mexico against Colombia.