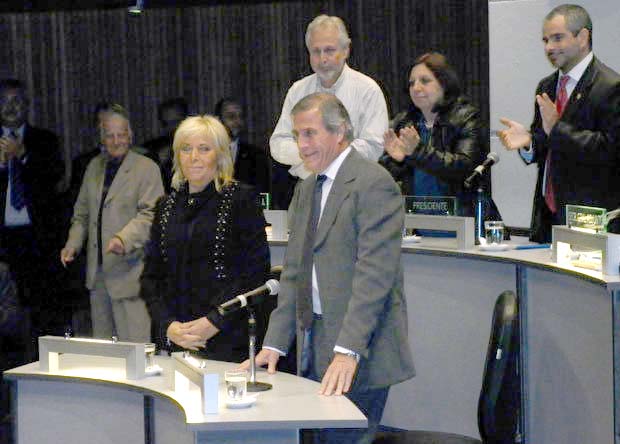 Uruguay’s first lady is indeed Mrs. Silvia Martinez; after all, she is the beautiful and lovely wife of Uruguay National Team’s coach Oscar Tabarez. Her hubby who has battled with Guillain–Barré syndrome, for some time had no other option but to use a cane at the 2018 FIFAWorld Cup in Russia.

Tabarez a former defensive player has been responsible for his country’s national team since 2006; prior to that, he managed Velez Sarsfield, Milan, Cagliari, Boca Juniors, Deportivo Cali, Montevideo Wanderers, Uruguay U20 and Bella Vista.

Bella Vista was, as a matter of fact, the last team he played with, before retiring in 1979, at the age of 32.

Unfortunately, about Tabarez’s loving wife, there isn’t much out there; we know Silvia Martinez, was born in Uruguay and that they met when they were very young. They tied the knot while he was still playing soccer and went on having four beautiful daughters; Tania, Melissa, Valeria and Laura.

Married and with two beautiful kiddos, Tania Tabarez is a famous television journalist, she works for Tv Ciudad. Melissa and her partner Martin have two sons; Vale and her husband Fernando have one daughter, Sofi; and finally Laurita it seems has four children of her own.

Back in June 2011, $500.000 were missing from Tabarez’ bank account; the person held responsibly was a former employee named Natalia, who claimed she was having an affair with Tabarez, and that it was him who told her to take out cash from his credit cards.

According to Uruguayan media, Tabarez who is also a professor and his wife Silvia were separated from December 2009 to August 2010; the same sited added Natalia kept over 300 text messages between her and the coach; the messages were made public, proved that indeed the messages came from Tabarez’s phone; but never that he gave her the cards or that he authorized her to take out money whatsoever.

A few months after that happened, Silvia, 68, was walking on the street in Montevideo when two people driving slowly on a motorcycle approached and threw her acid from a bottle. Silvia who had previously reported possible attempts on her life suffered burns on 25% of her body.