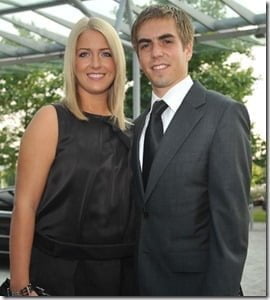 The defender Philipp Lahm has been together with the beautiful ex-Mercedes girl Claudia since 2008; although they met when they were just 16 through mutual friends. They were married on July 14 2010. The player married  Claudia Schattenberg in the Munich suburb of Aying, some 25 kilometres south of Munich where Lahm plays at Bundesliga champions Bayern Munich. Around 100 family and friends were there to witness their love, with Munich’s Andreas Ottl as the only player guest.

They tied the in a traditional Bavarian wedding, Lahm, 26, and Claudia Schattenberg, 25 at the time. The civil ceremony took place two days after he returned from Germany’s third-place finish at the World Cup in South Africa! Guess his wedding was his real trophy! Schattenberg might have a funny name but she is super hot, she always seems to show a classic yet elegant style that makes you an instant fan!

Don’t they look like royalty?? Well at least German royalty. The couple became enjoyed the wedding bliss for a couple of years and became parents for the first time in 2012. After the wedding, Claudia said that she would like a girl and then a boy but it’s going to have to be the other way around since they welcomed their first child into the world on August 15, 2012  a baby boy they named Julian. Now the family is complete.

I guess they complement each other in every way, this devoted wife dedicates herself to make hubby happy.

Here you can see more pictures of them.