Meet the WAGS of Manchester United

Manchester United have begun to turn the corner after a dismal season under David Moyes. But now under Dutch coach Louie Van Gaal, England’s most successful club have started to improve upon their standings as the start of the Premier League is now underway. However, instead of looking at the Manchester club’s form, let’s examine something more interesting and take a look at who some of the players are currently in a relationship with.

Coleen Rooney (wife of Wayne Rooney)
Coleen Rooney, partner of captain Wayne Rooney, was a showstopper at the Manchester United Player of the Year Awards at Old Trafford with her coiffed ponytail and off-the-shoulder lace dress. The two met during their adolescent years and started dating after secondary school. She is currently working as an English television presenter, columnist, as well as product endorser.

Ana Ivanovic (girlfriend of Bastian Schweinsteiger)
There has been a lot of attention on United during the summer with the club bringing in some eye-catching signings , such as the World Cup winning Bastian Schweinsteiger. The midfielder is currently dating Serbian pro tennis athlete Ana Ivanovic, who was recently ranked #6 in the world by the Women’s Tennis Association. She is also a former French Open champion.

Misse Beqiri (wife of Anders Lindegaard)
Backup goalkeeper Anders Lindegaard is making the most out of his final season at the club. Regardless of his future, he seems to be in high spirits as he cozies up with Misse Beqiri, whom he tied the knot with last summer in Mauritius. Beqiri is a Swedish model that’s also an Instagram sensation due to her “penchant for saucy snaps.”

Sam Cooke (girlfriend of Chris Smalling)
England defender Chris Smalling and his English glamour model Sam Cooke embarked on a slew of exciting summer adventures during their post-season break, swimming with turtles and exploring new heights climbing Machu Picchu in Peru, where they went on holiday before Smalling had to report for pre-season duty. 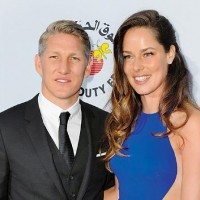 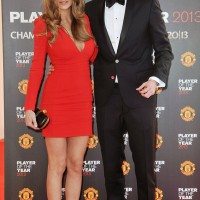 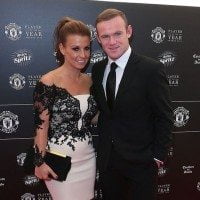 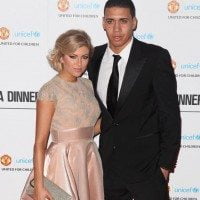