Meet Mrs. Vanessa Garcia; she is the beautiful wife of Venezuelan MLB player Antonio Senzatela; the pitcher for the Colorado Rockies, the team with whom he made his debut on April 6, 2016.

The son of Nidya who sadly passed away from stomach cancer in 2016, started his career with the DSL Rockies in 2012, after having signed a contract with Colorado as an amateur free agent that same year.

Subsequently pitched for the Hartford Yard Goats during the 2015-16 season and finally made into the Rockies’ 40-man roster the following season.

When that happened Antonio rushed to the phone and let his pretty wife Vanessa know the good news.

“I said, ‘Yeah, I’m a big-leaguer now,’” Senzatela confessed with a wide smile

Vanessa Carolina Garcia also from Venezuela  is a professional radiologist; she graduate of the Universidad Arturo Michelena in Valencia, Carabobo, gave birth to a beautiful boy in 2017. 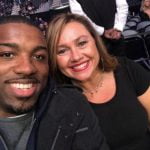 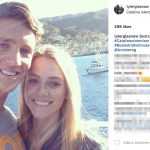 Brooke Register Meet Brooke Register! This beautiful model is or used to be the girlfriend of MLB … END_OF_DOCUMENT_TOKEN_TO_BE_REPLACED 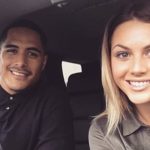