Mr. Ricketts, became in 2009 the Chairman of the Chicago Cubs and you could say it might been a dream come true being a longtime fan of the team. In 2009, he led his family’s acquisition of the team from the Tribune Company.

He outlined three goals for the organization: win the World Series; preserve and improve Wrigley Field for future generations; and to be good neighbors, giving back to the city and the team’s North Side neighborhood.

But all that, we have heard before, now we want to know about his wife and family. Cecilia, a dermatologist by profession and hubby live with their five children in Wilmette, Illinois.

And that is actually his favorite memory at a Cub game; meeting his darling future wife (Cecilia) in center field! How romantic! This two found love in their love for the sport! Get it!

The dermatologist Cecilia Ricketts, attended Loyola University Stritch School of Medicine for Medical School and graduated in 1992. She completed her education and training with her residency at Henry Ford Hospital and internship at Rush University Hospital.

Cecilia has had a successful career as a dermatologist and is associated with Skin Wellness Center of Chicago and holds several roles such as Medical Doctor and Dermatology.

But being a decent human being and owning the Chicago cubs or being a dermatologist like Cecilia and working like any other person seems not enough to be left alone these days; in recent reports we have learned a goat´s head was delivered for the Chairman at Wrigley Field on Wednesday afternoon! That is right, a legitimate goat’s head! The urban legend about the cubs not being able to win the world series cause of the curse of the billy goat seem to be making serious damage in some of the none Cub followers! Killing a goat! Come on! 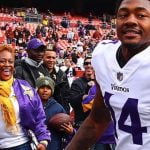 Stephanie Diggs Meet the lovely Mrs. Stephanie Diggs; she is the beautiful and proud mother of  NFL … END_OF_DOCUMENT_TOKEN_TO_BE_REPLACED

It is our grand pleasure to introduce you our newest Fab PGA Wag, Mrs. Kelly Pearce Martin who is … END_OF_DOCUMENT_TOKEN_TO_BE_REPLACED

Meet Audie Fugett, the wife of MLB player Adam Jones. Congratulations are in order for the couple, … END_OF_DOCUMENT_TOKEN_TO_BE_REPLACED