Ayan Broomfield is a stunning Canadian tennis player. Most importantly, she is the girlfriend of  Frances Tiafoe, the young tennis player from College Park, Maryland, and the youngest player to win the Orange Bowl in 2013 at the age of 15.

Standing at 6’2 (1.88 m), Frances Tiafoe and his twin brother Franklin Tiafoe were born on January 20, 1998, in Hyattsville, Maryland. Franklin  Asmiru Tiafoe attended Eleanor Roosevelt in Greenbelt and DeMatha High School. The twins grew up surrounded by tennis since their father worked at College Park Tennis Club.

“I remember just being small, hitting on the hitting wall a lot with my brother, running around talking to all the members,” he said. “It was a good life.”

Both loved playing tennis, Frances was more focused and able to divert all distractions, Franklin, however, couldn’t, was constantly grounded and unable to train with a coach; Franklin became more mature when he was at DeMatha.
He was a junior in high school when the University of Maryland offered him an opportunity to play there; sadly, Maryland cut their tennis program before he could say yes. Franklin subsequently received another to play Division III tennis from Salisbury University.
He didn’t get good grades and found himself unable to play; eventually, drop out of Salisbury University, enrolled at a community college close to his home, and trained at Junior Tennis Champions Center (JTCC), before his parents sent him USTA National Campus in Orlando, Florida. Franklin, along with his parents, are undoubtedly Frances’ biggest fans.

The bond I have with my brother is unbreakable!! I thank god everyday I have a baby brother that inspires, loves and respects me so much. I will never switch up till the day I die. I remember sitting in the lobby of our academy in College Park with my brother imagining we were on tv playing the legends of the game and now seeing him bring it to reality is a dream come true. I love you deep baby bro ♥️ twin kings till we die.

Frances Tiafoe’s parents are Frances Tiafoe Sr. and Alphina Kamara Tiafoe, both born in Sierra Leone and escaped to the United States in the 90s’ during the civil war.

“Our parents are our biggest inspirations on the fact that they worked extremely hard to give us the best life they could, so that we could focus on the sport we love to play.

Alphina Isatu Kamara Tiafoe, aka Alphina Tiafoe born on June 12, 1967,  in Sierra Leone, emigrated to the United States in 1996, where she met her husband, who had emigrated from Sierra Leone three years prior.
Frances Sr. was born to a wealthy family; he traveled to the United States several times before he decided to move to the U.S permanently. His wife comes from a modern family, Alphina won a U.S Green Card Lottery, and moved to College Park, where Frances was also living and eventually started dating, got married, and welcomed twin sons.
Alphina worked as a nurse while Frances Tiafoe Sr. found a job as a janitor at the Junior Tennis Champions Center in Hyattsville, Maryland. Mr. Tiafoe became a day laborer head of maintenance in 1999, and often, his boys tagged along.

“I remember just being small, hitting on the hitting wall a lot with my brother, running around talking to all the members,” he said. “It was a good life.”

No doubt you all know everything there is out there about Tiafoe’s career; therefore, allow us to tell what we know about his exquisite lady.

5’7″ Ayan Broomfield was born in Toronto, Canada, on August 13, 1997. She has an older sister Kai who also played tennis at Marshall college. Ayan, a former Language & International Trade student at Clemson, transferred to UCLA in July 2017.

In 2019, teaming up with Gabby Andrews, Ayan won the NCAA doubles championship. She was voted the ITA Southwest Region Senior Player of the Year, All-Pac-12 honoree, Pac-12 All-Academic selection

Mrs. Broomfield won the tournament in Petit-Bourg; she reached her highest singles ranking of 680 in April 2015, and she reached the world ranking number 1028.

On July 22, 2019, Amazon Prime Video released their short documentary “Ayan Broomfield Tennis Story.” Ms. Broomfield had the opportunity to appear alongside Will Smith as a body double of Venus Williams in the 2021 film King Richard. 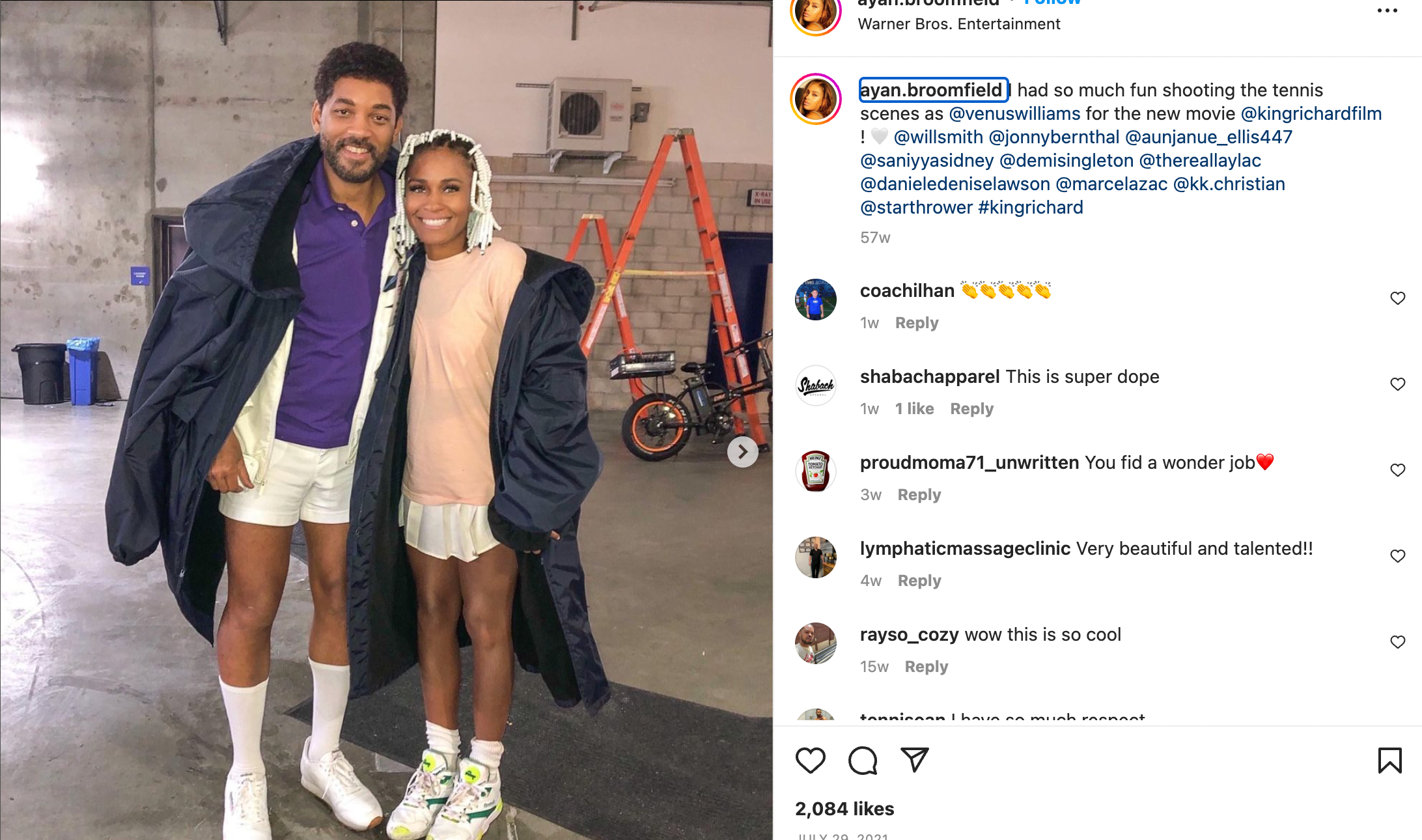 Ayan appeared on campaigns for Wilson and Fila.