Veronika Shkliaeva is the proud wife of Russian Tennis pro, Karen Khachanov -currently doing what he does best at the French Open.

Veronika’s husband who goes by nickname, Djan, sarted playing tennis as a 3-year-old in kindergarten.

His father, Abgar, played volleyball at a high level before studying medicine; while his mother, Natalia, also studied medicine. He has two siblings, Margarita and Georgiy.

Karen attended Sozvezdie secondary school in Moscow and University of Physical Education in Moscow. He grew up looking up to Marat Safin and Juan Martin del Potro. In addition to tennis, he enjoys basketball, football. In fact, according to his ATP Tour profile, is he wasn’t a tennis player he would be a basketball player or a sports agent. He’s been playing professionally since 2013. 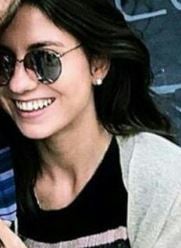 The young couple has known each other since they were kids! During an interview, Karen spoke about his very private wife, admitting he didn’t make a good first impression when he first met her at age 8.

The two happened to be at the airport at the time; and Karen was playing with a baggage trolley. To make the story short, he ran the trolley into Veronika. Naturally, she was deeply unimpressed and told her mother that Karen was “an idiot” The two have been married for the past three years.

Veronika Shkliaeva or should we say, Mrs. Khachanov is super low key. There’re only a few public photos of the dark-haired beauty and not many details of her are known. Is clear she enjoys her privacy and prefers to leave Karen to take all the glory.

You can catch a glimpse of her on his Instagram page here.