Meet the lovely Greta Rooney, she is the loving, caring and elegant wife of Art Rooney II, eldest son of Dan Rooney and grandson of Art Rooney Sr. but aside from his impressive family tree, you should know first and foremost that Greta Rooney’s husband is the president of the Pittsburgh Steelers.

Before we can tell you what we know about Mrs. Rooney, let me tell you about her husband.

First, the thing you need to know is that Mr. Rooney was born Arthur Joseph Rooney II on September 14, 1952, in Pittsburgh, Pennsylvania.

In 1978, he graduated with a B.A. in Political Science from the University of Pittsburgh.

Subsequently in 1982, received his law degree from Duquesne University’s School of Law.

He is a counsel at Buchanan Ingersoll & Rooney law firm and is the chairman of the NFL’s Stadium Committee.

Has been on the board of directors of the Steelers since 1989, and as president since 2003.

Greta was born Mary Greta Kimball on July 19, 1960. She graduated from Bishop Carroll High School and Penn State. Greta and Art Rooney got married on July 13, 1985, and have four children together; daughters, Meghan, Mary and Annie; son, Dan (b.December 25, 1989), a former quarterback at Dartmouth University from where he graduated with a major in history. He joined him father with the Steelers. 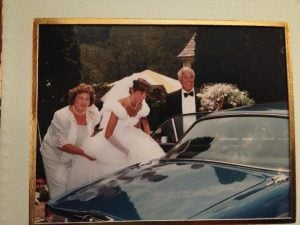 Daughter Meghan holds a degree in communications from Villanova. She is the editor of an online magazine and married her college sweetheart Jonathan Graham Foley on 12  July 2012.