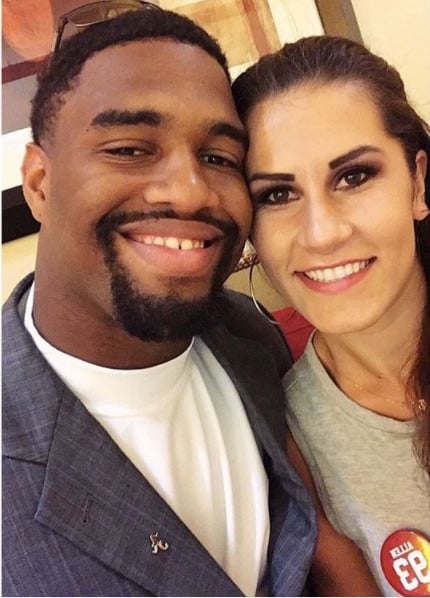 Hannah Franklin is the girlfriend of Jonathan Allen, the defensive end for the Alabama Crimson Tide at the University of Alabama. Allen currently a senior was crowned the 2012 Virginia Gatorade Football Player of the Year, during his senior year of high school.

6’3″ Allen was born on January 16, 1995 in Aniston, Alabama. He and his brother Richard III are the sons born to Richard Allen II, a nuclear biological chemical specialist in the Army and their mother, who lost custody of her children when Jonathan was in the third grade.

Allen was 9 when his father regained their custody, at the time Richard II had remarried to Tracy Akllen, who slowly but surely won her way to the boy’s heart. She would cook delicious meals for Jonathan and his brother Richard for hours, she also got him back on track in school. Even if Tracy proved to be an excellent mother figure, for Jon and Richard their mother is always on their mind and hearts.

“I’ve been trying, but I don’t know how to get in contact with her,” Jonathan said. “No idea where she lives. … It would mean a lot [to talk to her]. I would love to. That’s my mom. You never replace your mom, even though my step mom, I love her to death. She’s been great. But there’s nothing like your mom, you know?”

Allen attended Stone Bridge High School in Ashburn, Virginia. and is expected to graduate from the University of Alabama in 2017.

Lovely Hannah Franklin (b. November, 1995) grew up in  Champaign, Illinois. She studied Human Performance and Exercise Science at the University of Alabama and currently works at Lululemon.

Hannah and Jonathan Allen met at the University of Alabama. They have been dating since July 8, 2015.