Major congrats for L.A Lakers baller Nick Young and rapper Iggy Azalea, whom are ready to take their relationship to the next level! According to reports they got engaged June 1st, during Nick’s birthday party!

TMZ reports, the guard/forward got down on one knee and popped the question to the 24-year-old rapper who said yes! Nick gave his gal a fat 10 carat yellow diamond ring, sweet! 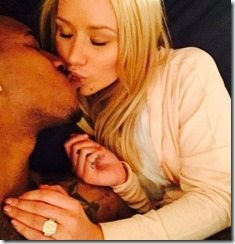 Let’s face it, Iggy hasn’t been the only woman in his life, but she is the one that has managed to make Swaggyp1 say:

She said yes. It’s over man. I’m getting married!

Iggys’ soon-to-be hubby has certainly gotten around, he’s been in trouble with the ladies in the past and in 2013 he even faced rape charges.

Young and Puerto Rican sprinter Carol Rodriguez were an item for a while, actually for years! They were a college couple while at USC. They broke it off when Young allegedly fathered a  baby with another girl named Keonna –who gave birth in 2012. 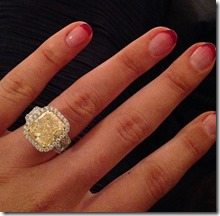 But all that is in the past, now the 30-year-old has expressed his desire to share his life with Iggy, real name Amethyst Amelia Kelly . The couple began dating in 2013 and have been pretty inseparable ever since.

The ‘Black Widow’ singer couldn’t hold her happiness at the event last night and like any other girl living her dream, she gave fans a closer look at her engagement bling by posting a photo to her Instagram account.

We have to give it to Nick, he did well, he gave her quite the impressive diamond, worthy of flaunting!

Happy for the couple?