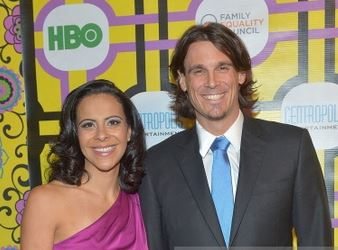 32-year-old Maria Isabel Alvarado Kluwe is used to being in the spotlight thanks to her husband’s career in football and especially for his views on equality in marriages. He is one of the most vocally active supporter of gay rights. She is in complete agreement with him, and when he was asked for an article and picture for Out magazine, she encouraged him to pose shirtless.

The former Isabel Alvarado met her future husband, Chris Kluwe, while he attended UCLA. She worked in the recruiting office, and didn’t know he was a football player. They began dating during his first year there and were married at the end of his senior year in May of 2004. They have two daughters, Remy and Olivia who were born in 2008 and 2010.

Chris Kluwe has many diverse interests and activities: he plays in a rock band, he’s an avid online gamer, he is an activist for gay rights and plays pro football. But Isabel and his number one priority are their two adorable daughters. Family life is the most important aspect  of life for him and his wife of nine years. And that’s as it should be.