Jessica Burton is the lovely girlfriend of NBA Will Barton. Her man is currently a shooting guard for the Denver Nuggets. In recent NBA news, her 24-year-old man was hit with late technical for delay during last night’s game.

On Monday night the Nuggets faced the Houston Rockets. While Will Barton had an impressive one-handed dunk. He also scored 23 points, including two game-sealing free throws. However, his most memorable moment, seems to have been when he tossed a sneaker off the court.

Luckily, Barton remained his cool self, after the game win. He said “We’re cool. No hard feelings,” “Stuff happens during the game, man.”

Now, to what you really want to know. Barton’s gal: Jessica Burton.

She is orginally from Cordova, TN and describes herself on social media as “I am 1 of 1, a Southern girl, college grad, & mommie 7.25.2014❤” Now a days, the young mom of one, keeps busy on Pinterest. Her pins range from fashion, jewelry, food, art, traveling, photography, baby clothing, etc.

She is a Cordova High School Class of 09, graduate. 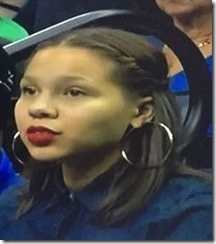 Jessica Burton gave birth to a baby boy in July 2014, according to baby registry page, The Bump.

Last year, Will said of becoming a father, “It just kind of matured me,” “Put life into perspective for me. It made me less selfish; I have someone to care for that’s more important than me. I’ve always been family first and this just took it to another level.”

It was only fair their little bundle of joy would earn the nickname “Lil’ Thrill.” When describing the arrival of their son, Will said You know what’s so weird, I didn’t cry,” “It was just so beautiful. I was just sitting back and I was like ‘wow’ and happy and laughing. Everyone’s in there so serious and as soon as he comes out I’m just playing with him and talking to him. I kept the mood light. That’s just my demeanor and my personality.”

Will is sure one proud daddy, he often uploads adorable images of the couple’s son to his Instagram account.

2014 was an important year for Jessica Burton, she not only became a happy mama but also earned a Bachelor of Liberal Studies degree in Interdisciplinary Studies from the University of Memphis in May 2014.