Vanessa Oliva is the wife or girlfriend of Arnold Peralta, the Honduran soccer player who was killed in La Ceiba, Honduras on December 10, 2015. Peralta a former midfielder player with the Scottish club Ranger, was in the roster that represented Honduras at the 2014 World Cup in Brazil and the 2012 Olympic Games in London, he was the Under-20 captain and ultimately played with the Honduran soccer club Olimpia. 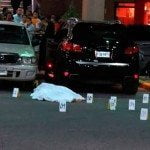 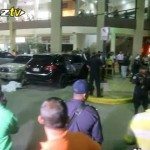 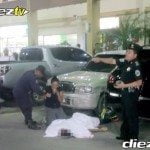 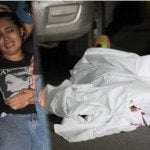 On the night of December 10, 2015 the photo that covered the news in Honduras and internationally was the one showing the harrowing moment when Vanessa Oliva wept over body of her beloved husband after he was shot 18 times in Honduras car park in La Ceiba where he had been buying clothes for his baby daughter.

Vanessa and Arnold Peralta where buying  clothes for their three-month-old daughter Camilla at Uniplaza shopping mall n La Ceiba around 5:30 p.m local time when he was shot 18 times in the head and chest by two suspects in a motorcycle who approached the midfielder player and without saying a single word opened fire.

Neither Vanessa nor his two friends with them Marcelo Canales and Marcelo Santos were injured. By the moment forensic arrived to the scene they  found Peralta’s body next to his Porsche Cayenne and Vanessa crying inconsolably over his body.

His father Carlos Peralta said he had told his sold a fancy car like the one he ha draw too much attention, making him a target for robbers, but nothing was stolen from him when he was killed, Honduras like its neighbor country El Salvador and Guatemala are plagued by dang violence. El Salvador is one of the most violent countries in the world with more than 470 gang related homicides every month.

Vanessa Oliva, 27, from La Ceiba,  Atlantida,  Honduras had been dating Peralta since 2013, she was at the Airport with her mother in-law when he was left of the National team after he suffered an injury.

Our thoughts and prayers are with Arnold Peralta’s wife Vanessa Oliva, his daughter, other members of his family, friends and fans during this sad time.