Back in 2013, just days after the unfortunate exit of former manager Tito Vilanova, Barcelona appointed Gerardo Martino as their new manager. The Argentine leaves Newell Old Boys to take over the La Liga champions on a 2-year contract.

Let us tell that with Martino comes a WAG, her name is Maria Angelica Martino.

“I feel identified with the style of football Barcelona play. I am an admirer of the work that Guardiola did. It’s the style I like the most. The respect for the ball, they play the ball from the back,the possession, the triangulations. The pass is the main premise of football.”

The veteran coach was born in Rosario, Argentina; famously known as “Tata,” a nickname many said he got while he played for the Argentine team Newell Old Boys. 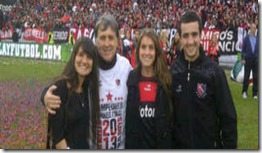 Family is really important for Martino; known as a man of respect and high family-values so wife and children always come first to him.

Furthermore, his oldest daughter Maria Noel is a lawyer; Maria Celeste was born in 1991 and their son 22-year-old Gerardo Jr. is without a doubt following his father’s footsteps.