Milica Krstic is the lovely wife of Boban Marjanović, the Serbian NBA player currently a center player for the San Antonio Spurs as well as  for the Serbian National basketball Team.

Milica Krstic Marjanović’s hubby, Boban Marjanović who stands at 7’3″ was born August 15, 1988 in Zajecar, Serbia, during his youth Boban played with Rtanj and Hemofarm. 2010, Marjanović signed a three-year contract with CSKA Moscow, he was loaned to Žalgiris, until the end of the 2010–11 season in December, 2010, then in July 2011, signed with Nizhny Novgorod, returning to Serbia, and signed with Radnički Kragujevac for the rest of the season in 2012, later in July signed a contract with the Serbian team Mega Vizura for the 2012–13 season.

Marjanović signed a two-year contract with Crvena zvezda on July 2, 2013, and inApril 2014, was selected to the ideal team of the 2013–14 ABA League season along with DeMarcus Nelson.

On April 2, 2015, he was selected to the ideal team of the 2014–15 ABA League season, named the MVP of the ABA League playoffs, he was chosen to the All-Euroleague First Team and was named the Serbian Super League MVP in July, 2015. The San Antonio Spurs announced they signed a one-year, $1.2 million contract with Boban Marjanović on July 17, 2015.

Milica Krstić met her husband at a birthday party at their natal Serbia, they dated for six years living together for three of those before they finally got married twice in 2014. The first wedding was at the beautiful Mexican beaches on July 3, 2014 and the second wedding in Belgrade, Serbia on July 13, 2014. Milica and Boban have two beautiful sons together, Vuk, 5, and the little Pera is six months old. 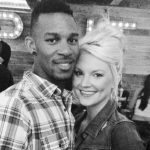 Lindsey Tillery This stunning young lady is Lindsey Tillery; she is the beautiful longtime … END_OF_DOCUMENT_TOKEN_TO_BE_REPLACED