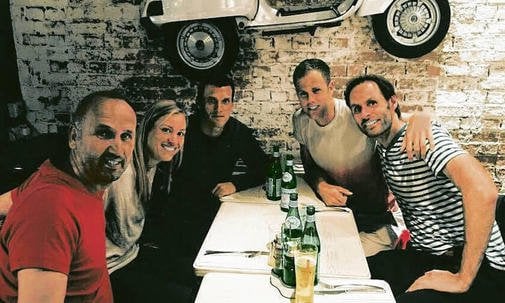 Torben Belts is the talented and amazing coach of German tennis player  Angelique Kerber. For years rumors about Kerber’s relationship with her coach have been circulating, are they a couple? Is Angelique gay? Check what we know.

First and foremost let clarify that Angelique Kerber is single and straight; there was a time when media suggested she and fellow tennis player Andrea Petkovic were dating. However Kerber confirmed she was not dating Andrea nor was she gay whatsoever.

“A man, very clear! I’m still waiting for the dream prince, keep searching. But I am currently on the road nonstop, so it is not easy to meet someone. “

Not likely. Their relationship is merely professional, Surely they are friends, but that it.

Torben Beltz was born on November 27, 1976, in Itzehoe, Schleswig-Holstein in Germany. The father of two girls and former tennis player, started working with Kerber in 2003, she was 15 at the time and just turned pro.

The hard work paid off, but it took eight years to see the results; that happened in the semi-finals of the 2011 US Open and spend the next two years getting better results, but by 2013 Angelique decided she wanted something different. She hired Irani coach Benjamin Ebrahimzadeh but after a couple of losses, Kerber fired Benjamin and asked Torben to help her.

After they reunited in 2015, they have been unstoppable.