Meet Mrs. Andrea McDonald; she is the beautiful and proud mother of NFL player Alex Collins, the 5’10” running back for the Baltimore Ravens. He also played for the Seattle Seahawks and college football with the Arizona Razorbacks at the University of Arkansas in Fayetteville, prior to joining Seattle in 2016.

Back in 2013, when Alex prepared to sign his letter of commitment with Arizona, there was a story about Andrea not being happy about his decision, so she left his high school ceremony, without signing the papers; Andrea hoped her son signed with the University of Miami instead.

Because Alex was under 21, the LOI must be signed by a parent, Andrea refused to sign; the letter was eventually taken care of; but not by her, but rather by Alex’s dad Johnny Collins, when coach Bret Bielema faxed another LOI a day after the ceremony.

Andrea was still pretty mad about it; so she hired a lawyer to voided the letter of intent, buy some time and maybe her son could sign another LOI with Miami.

“Ms. McDonald understands that Alex has received consent from his father who has signed the letter-of-intent for him to play football for the University of Arkansas. However, our client’s initial intentions remain unchanged. She is a loving and caring mother who only wants her son to choose a university without any outside and inappropriate influences.  Ms. McDonald hopes all NCAA rules and regulations were followed during today’s signing. She is not seeking any personal financial gain because her only concern is for Alex’s happiness and well being.  The Cochran Firm is standing by Ms. McDonald in this difficult time and has made all of the firm’s resources available to her as she explores her options.”

All the trouble ended after Alex and Andrea sat for a long conversation.

“The last conversation I had with her was basically why I chose Arkansas and why I felt the love at Arkansas;” Collins said. “She always supported me; it’s just the fact that from her standpoint; she wanted to make sure that this is the right decision for me.”

“That I’m not just picking a school, that I understand what I’m getting myself into, that I’m leaving the state, that I’m going to be a four-to-five hours plane ride away and to make sure that this is what I always want to do.” 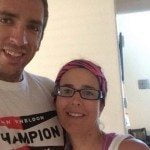