This pretty young gal is Rachel Adekponya; she is the wife of Aron Baynes is the Australian NBA player who currently plays for the Boston Celtics. 6’10” Baynes born in  Gisborne, New Zealand, attended at Washington State University where he played basketball. On 1 June 2009, Baynes signed a two-year deal with Lietuvos Rytas оf thе Lithuanian Basketball League.

Aron’s wife   is our girl Rachel Adekponya, I gotta say.. not much about her out there, except that like her NBA hubby Rachel is  from the land down under, she is the little sister of professional Australian basketball player Mathew Adekponya, 24, who last June went undrafted in the 2014 NBA Draft making him an unrestricted free agent.

Aron who loves to eat barbecue had to put the ribs aside when Rachel who is pregnant can’t stand the smell or the taste of it, luckily for Aron, his brother-in-law came to his rescue! 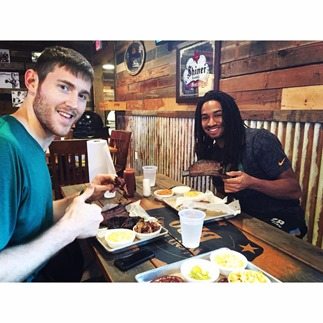