Chuck’s stunning and talented wife, recently teased her followers on social media after she posted an image of herself completely naked with her back to the camera. The 34-year-old joked adding a hashtag alluding to the current quarantine situation.

However, this is not the first time Harkleroad removes her clothes for the camera. In August 2008, she became the first professional tennis player to pose for the U.S. edition of Playboy magazine. At the time she claimed to have been inspired by Olympic swimmer Amanda Beard.

Ashley, a Georgia native was born May 2, 1985; turned professional in June 2000, when she was fifteen years old.
During her career, she won eight ITF singles and five ITF doubles. She peaked at world No. 39 back in 2007, before taking time away from the sport to have her first child. And after a brief comeback in 2010, she again stepped back from competing to have another child.

She retired from professional tennis in 2012, at which point she became a broadcaster with the Tennis Channel. 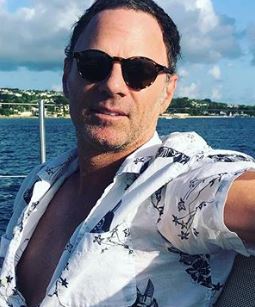 She has been married to Chuck Adams since 2009. He is actually her second husband. Ashley was first married to fellow tennis player Alex Bogomolov Jr.; for two years until their divorce in 2006.

Chuck Adams is also in the tennis world, he is a former player turned coach. That is exactly how he and Ashley met as he was hired to serve as her coach.
Born April 23, 1971; the California native who is 15-years his wife’s senior, is a former ATP star. He began his professional career in 1990, achieved a career-high singles ranking of World No. 34 in 1995 and retired in 1997.

Chuck Adams and wife are also the owners at Malibu Valley Vineyard Wines. Chuck who is also active on social media describes himself as a ‘Real estate investor’
Chuck Adams and Ashley are the proud parents of two children, Charlie and Loretta.