Rosanna Colon is the lovely wife of MLB star, Bartolo Colon. Her husband of over two decades made headlines after he hit his first home run at age 42. Colon is the oldest active player in MLB, he currently plays for the Texas Rangers.

Bartolo Colon was born May 24, 1973, in DR. Nicknamed “Big ” he was signed by the Cleveland Indians as a free agent in 1993. In 2002 he was traded to the Montreal Expos. He is the only active player to have played on the Expos.

In 2012 he agreed to a one-year, $2 million contract with the Oakland Athletics. In 2014 Colon signed a two-year, $20M deal to join the Mets. Subsequently in 2017, played for the Braves and the twins, before finally joining the Texas Rangers in February 2018.

Colon has been known to praise his wife and children during interviews in the past. When asked last year, “what drives him” he answered: “‘My family and my kids and wife.’

Rosanna Colon gives ‘support’ a whole new meaning. She has literally known Bartolo since the age of 13, as they both grew up in the Dominican Republic. She was born Paula Rosanna Vargas.

Is safe to say this lady has been influential in the career of her man. She officially became Mrs. Colon in 1996. 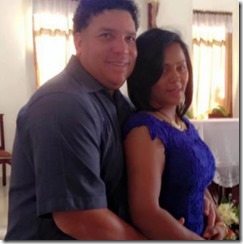 Colon, and his wife of over 20 yearsRosanna have four incredible sons together; Bartolo Jr., Emilio, Wilder and Randy. (below)

The couple has been through a lifetime together; even became US citizens on the same day, he posted a photo of the couple celebrating the happy September 2014 occasion, to his Facebook account.

Most recently the 20 plus years marriage will have to face Bartolo Colon’s cheating. News broke about Bartolo being the father of two elementary-school-age kids with former mistress Alexandra Santos. 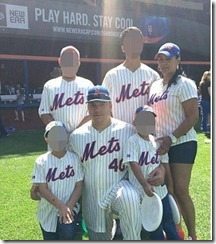 Furthermore, Rosanna Colon resides in Clifton, New Jersey with her famous hubby and their four sons. About the news her hubby fathered a son and a daughter with Alexandra Santos, Rosanna Colon admitted to the media, she has known about her hubby’s second family for some time, but she didn’t give further details.

It’s clear Rosanna forgave the right-hander for his infidelity but it remains to be seen if she will handle the pressure before the public eye, now that the word is out, that the man she has been married to, not only cheated on her but has also been labeled a deadbeat father to his out of wedlock, offspring and is facing a pending lawsuit.