Gina Devasahayam has been named as the crazed fan obsessed with MLB player -Brett Gardner.

Gina calls herself the ‘Future Wife of Brett Gardner’ and though it may be a laughing matter it is now turning quite serious. According to reports, Gardner has filed an order of protection to keep her away from him and his family.

Last year, 46-year-old Gina also made headlines after she sued Gardner, the Yankees and MLB last year after she was booted out of Yankee Stadium during a playoff game in October. At the time, Gina who insists Brett Gardner wants her around, tried to sneak into the visitors clubhouse at Oriole Park at Camden Yards in August to see Gardner, but was subsequently booted from the stadium. The Yankees are seeking to ban her from stadiums.

Gina who is active on social media, claims that after three years of online interactions with Gardner she began attending the games. She writes on her Twitter bio, ‘Founder & CEO, GenetikSignal is an innovative biotechnology company on anti-aging products; my personal interests, my love life, and my professional life’ 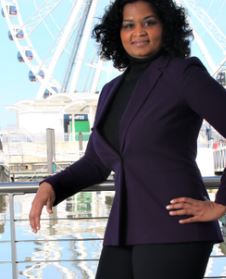 Her account is filled with romantic references to Gardner. Devasahayam who said during an interview that the fact that Brett is married to Jessica Clendenin, is of no importance is listed as the founder of GenetikSignal -a biotech start-up discovering innovative anti-aging products.
According to its website, Gina Devasahayam is a bio-entrepreneur and innovator. She has an educational background in biotechnology and biomedical sciences. She has a Ph.D. in Biomedical Sciences from the School of Public Health, SUNY, Albany, NY. Gina has 6 years of postdoctoral training at the UVA Medical School on signal transduction, pharmacology and drug discovery.
She is a graduate of the INNoVATE Program of Lifescience Entrepreneurship from Johns Hopkins Carey Business School, Rockville, MD in 2012.