This stunning gal is Amra Silajdzic Dzeko; a Bosnian model, but first and foremost she is the beautiful wife of Bosnian soccer player Edin Džeko. The 6’4″ striker for Serie A Club  Roma and Bosnia and Herzegovina National Team.

Edin also played for Teplice, VfL Wolfsburg, and Machester City prior to joining Roma in 2015, initially as a loan from Manchester City. He eventually signed with Eusebio Di Francesco’s team on August 12, 2015.

Džeko’s Wife Amra a model and actress was born on October 1, 1984, in Sarajevo. She started modeling in 2002 when at the age of 16, won the Metropolitan Top Model contest in France, she signed with Elite Models in Paris not long after that.

When it comes to acting Amra made her acting debut in the 2011 television series CSI; NY as Sass Dumonde; the following year she appeared on Entourage and as Scarlett Dax in the 2011 Film Gothic Assasins.

Amra Silajdžić Džeko is the proud momma of three beautiful children daughter Sofija born on November 1,  2003, from her first marriage to Serbian businessman Vladimir Vicentijevic (married in 2001 and divorced in 2007). 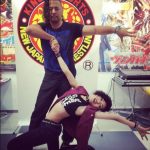 Harumi Maekawa This lovely WWE Wag is Harumi Maekawa; and she is the loving, caring and beautiful … END_OF_DOCUMENT_TOKEN_TO_BE_REPLACED

Born December 1, 1962; Pamela McGee was made for success. She is not only a retired professional … END_OF_DOCUMENT_TOKEN_TO_BE_REPLACED