Carine and Gilles have been together for a while, according to some reports the couple –who are parents of two small children–are married but not official records have been found.

Carine gave birth to the couple’s first child, son Timothee Simon in 2010. They also are parents of another son, Valentin born in 2013. 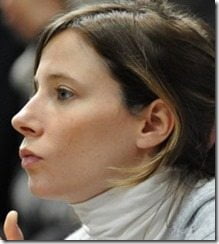 During an interview with L’Equipe,the French mom of two gave one of the most honest interviews, she spoke about her life with the tennis player: ” At first I really liked it. Gilles allowed me to discover the world. The beautiful places, beautiful hotels, life without constraints.

But after about a decade of traveling the world with her tennis player hubby, she says somewhat bitter:

In fact, little by little, Gilles uprooted me , she says. I cut ties with people I loved and I lost my personality Even my mother introduced me by saying..: “This is the wife of Gilles Simon.” Sometimes my relatives called me just to ask me news of Gilles. I no longer existed and I too got tired. ”

The lovely blonde was 24-year-old when she met Gilles and put aside her personal ambitions to become his companion. Despite the blues, sacrifices and disappointments that sometimes punctuate the life of an athlete but also a couple, at the end of the day love prevails as she says: “We love, we love, we love If I do all this is because Gilles, I can not live without him. ”

Carine and Gilles are super private, but you can find her man on Twitter here.