Heidi Ufer is the proud, loving, supportive better half of Miami Heat’s Basket baller Shane Courtney Battier. Their fairy tale story together goes back to their high school years! They tied the knot in 2004 and have two children. Shane Battier’s wife Heidi Battier has been in the picture since the two got together in high school! Apparently since baller skills made him some kind of god in college basketball while at Duke no one else had a chance since he was already taken! They were married in 2004. Their wedding took place at Meadow Brook Hall at Oakland University in Rochester, Mich 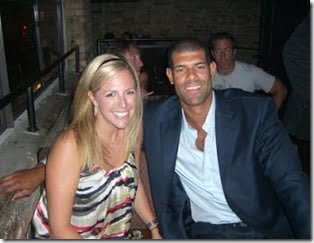 You just need to take a look at their pictures together to see how sweet they are to each other! Heidi is super active in  his career and we always see her around her man. Heidi and Shane formed the Battier Family Foundation, which is designed to “encourage and inspire leadership qualities in young people.” Heidi has worked as an assistant athletic director, soccer coach, and taught public speaking. Mrs. Battier also currently serves on the board of the Houston Boys and Girls club. Don’t be fooled by her height after all, they say all the best things come in small packages right! At least it has come true for Shane, they look inseparable! What the secret for this power couple??

“Our relationship is built so much on laughter but she was worried I would
say something distasteful,” Battier said. “I just said ‘There are times when
you’re going to overstep your boundaries and I’m going to yell at you: You’re
over the line.’ “

The couple has been together forever-actually since meeting in the seventh grade- but married for nine years, they have two children, first they welcomed baby boy Zeke Edward Battier, born on June 2, 2008; then came baby girl Eloise, born April 17, 2001.