Christina Dudley is the lovely wife of professional NBA player, Jared Dudley -currently a forward with the Los Angeles Lakers.

Christina’s hubby was a four-year starter at Boston College and was voted ACC Player of the Year in 2007. NBA forward who played for the Charlotte Bobcats and Phoenix Suns before a trade sent him to the Los Angeles Clippers in 2013.
The 34-year-old California native, made 59 appearances with the Brooklyn Nets last season (25 starts), racking up averages of 4.9 points on 42.3 percent shooting from the field, 2.6 rebounds and 1.4 assists in 20.7 minutes per outing.
He has averaged 7.7 points per game in a 13-year NBA career, including two stints for seven seasons with the Phoenix Suns. He signed as free agent with the Lakers in July. 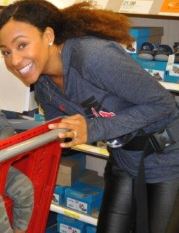 Dudley has been happily married to Christina Ford, now Christina Dudley -for several years. Together they share two children, a son and a daughter.

Despite being married to a professional athlete, Christina Dudley keeps a low profile. The couple isn’t very open when it comes to the details of their relationship, however it seems they keep a solid marriage.

Back in 2015, Christina Dudley participated in a Family to Family shopping event at the Monumental Sports & Entertainment Foundation. At the time a number of player’s better halves made the event as well.
Family-to-Family is an initiative that was created 19 years ago by the Wizards that provides holiday cheer to undeserved and deserving families in the Washington, D.C., metropolitan area.

In addition with the challenges of being an NBA wag, Christina certainly keeps busy with their two kids, daughter Jaylin, and son Justus. Thoug not much is known about the lovely Christina, is safe to say she is a supportive and proud NBA wag.