Julia Rohden is the model girlfriend of Argentine tennis star, Juan Martin del Potro. Her 27-year-old boyfriend is the guy who knocked off number one, Novak Djokovic in the first round of the Rio de Janeiro games.

Juan Martin del Potro was born on September 23, 1988. He began playing tennis at age seven and won his first professional game at age 14. The son of a veterinarian father and a teacher mother was named ATP comeback player of the year in 2011 and was Argentina’s sportsman of the year in 2013.

The 6-foot-6 Argentine also known as Giant of Tandil or Delpo, is known for his 2009 prowess. That year he claimed the 2009 U.S Open Championships by dismissing No. 3 Rafael Nadal in the semifinals before dethroning No. 1 Roger Federer in five captivating sets. He became the first man to defeat both players in a major tournament.

The following years he was sidelined by injuries but made a strong comeback in 2011; winning titles at Estoril and Delray Beach, leading Argentina to the Davis Cup final where it fell to Spain and finishing 2011 ranked No. 11. The following year he won four titles in five finals and had a career high of 65 matches. Del Potro dethroned defending champion Bernard Tomic to win his 18th career title in Sydney in January, 2014. His ongoing wrists injuries have made him consider an early retirement.

Julia’s man is suddenly looking like someone who might be able to add another medal to the bronze he took home from the 2012 London Olympics. Due to injuries, del Potro had over two years without participating in a Grand Slam tournament until playing at Wimbledon earlier this year. Making his fitness level something of interest.

Del Potro has also been keeping busy with smoking hot, Julia Rohden. The couple was first linked together in 2013 when she was 19. That makes Julia Rohden his girlfriend of at least three years.

The couple was pictured together getting back to their home country back in 2013. They were said to be coming from Miami. Her boyfriend had previously dated Stephanie Demner. Julia Rohden and del Potro were introduced by a mutual friend. 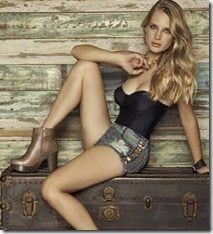 Julia Rohden was born December 28, 1994 in Misiones, Argentina. The blue eyed stunner grew up in the small town of Misiones, where she attended high school. She began modeling as a teenager an has been very successful, landing covers left and right.

She has worked with a ton of campaigns, among them we can mention: Kosiuko, Caro Cuore, Cerini, Falabella, Union Pacific, Lady Stork, Lody. The blonde is signed to Dotto Models and has also been featured in the covers of Para Ti, Para Teens, Elle Latinoamérica, Gente Argentina.

Julia Rohden and her tennis star beau keep things very private as they don’t have many pictures together.