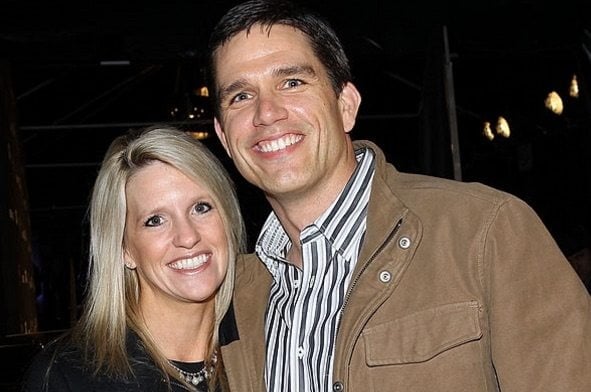 Julie Green is the loving and stunning wife of former NFl player Trent Green who fater spending 15 amazing years with the NFL found a spot as a NFL analyst at CBS Sports, he is also the chairman of the Trent Green Family Foundation.

Julie Green’s hubby Trent Green has been an analyst with CBS Sports since April, 2014, before that he worked for Fox Sports and for Westwood next to Ian Eagle calling Thursday Night Football. Green born and raised in Cedar Rapids. Iowa played colleger football for the Indiana University Hoosiers. He was selected by the San Diego Chargers with the 222 overall pick in the 8th round of the 1993 NFL Draft.

Trent never played with San Diego, he played with the BC Lions and with the Washington Redskins in 1995. He then caught up to the St Louis Rams in 1999 and the Kansas City Chiefs in 2001. Green agreed on a deal with the Miami Dolphins in 2007 and played his final season in the NFL with the St. Louis Rams. Green announced his retirement from football to pursue a career in broadcasting via his rep on June 12, 2009.

“He had a long, prosperous, very successful career. He believes he can still play, but the demand isn’t real high out there right now and he’s not the type of guy who is going to sit around for four or five months waiting for the phone to ring.”

Trent Green’s wife is the lovely Julie Green, his wife since February 5, 1994, together they have three children, sons T.J. and Derek and daughter, Janelle.

Julie Green was born Julie A. Lentz in Fort Wayne to Bill and Darcie Lentz both Indiana University graduates like Julie and her siblings David Lentz her brother and Susan her sister. Julie Green graduated in 1992 from the School of Education, she was a member of the Chi Omega Sorority.

The 29-year-old Chelsea star Fernando Torres went on vacations to Ibiza on Wednesday, with his wife … END_OF_DOCUMENT_TOKEN_TO_BE_REPLACED