Have you met Mrs. Gina Tobey? She is the loving and beautiful mother of college football player Justin Fields, the talented 6’3″ quarterback for the Ohio State Buckeyes at Ohio State.

Prior to joining the Buckeyes, Justin played with the Bulldogs at the University of Georgia.

Gina’s 6’3 (228 lb)boy Justin was born on March 5, 1999, in Atlanta, Georgia. He attended Harrison High School in Kennesaw, Georgia where he was the starting quarterback for two years.

Fields was named MVP at the Elite 11 QB competition in 2017, first-team all-state, and  Mr. Georgia Football by the Touchdown Club.

He initially committed to Penn State but had a change of heart and opted to play with the Bulldogs at the University of Georgia instead, serving as back up for Bulldogs’ QB Jake Fromm.

During his debut night with the Bulldogs, Justin completed 7 passes, one of those was a 12-yard touchdown pass, 63 yards, and three carries on 12 games.

The Bulldogs lost to Alabama in the SEC Championship game in 2018, following that loss, Justin announced he was transferring to Ohio State. He completed 27 of 30 passes for 328 yards and four touchdowns.

“I’ve decided to transfer to Ohio State University where I will continue to pursue my undergraduate degree and play football for the Buckeyes,” Fields wrote in a statement. “I’ll miss my teammates more than they’ll ever know, and I wish them all the best as they get ready for another season. I hope the bonds we’ve developed this past year will never be broken by where we choose to play football or where we end up after college.”

He was among the finalist for a Heisman Trophy; this year he finished 908 passing yards, 57 rushing yards, 11 passing touchdowns, and 2 rushing TD’s.

Fields was pursuing a degree in consumer and family financial services when he announced he would skip his senior year and enter the draft. He finished his college career completing 423 of 618 passes for 5,701 passing yards and 67 touchdowns, he also recorded 1,133 rushing yards, 19 touchdowns in 34 games.

On January 18, 2021, Justin Fields announced he was entering the NFL draft and forgoing his last year of eligibility. 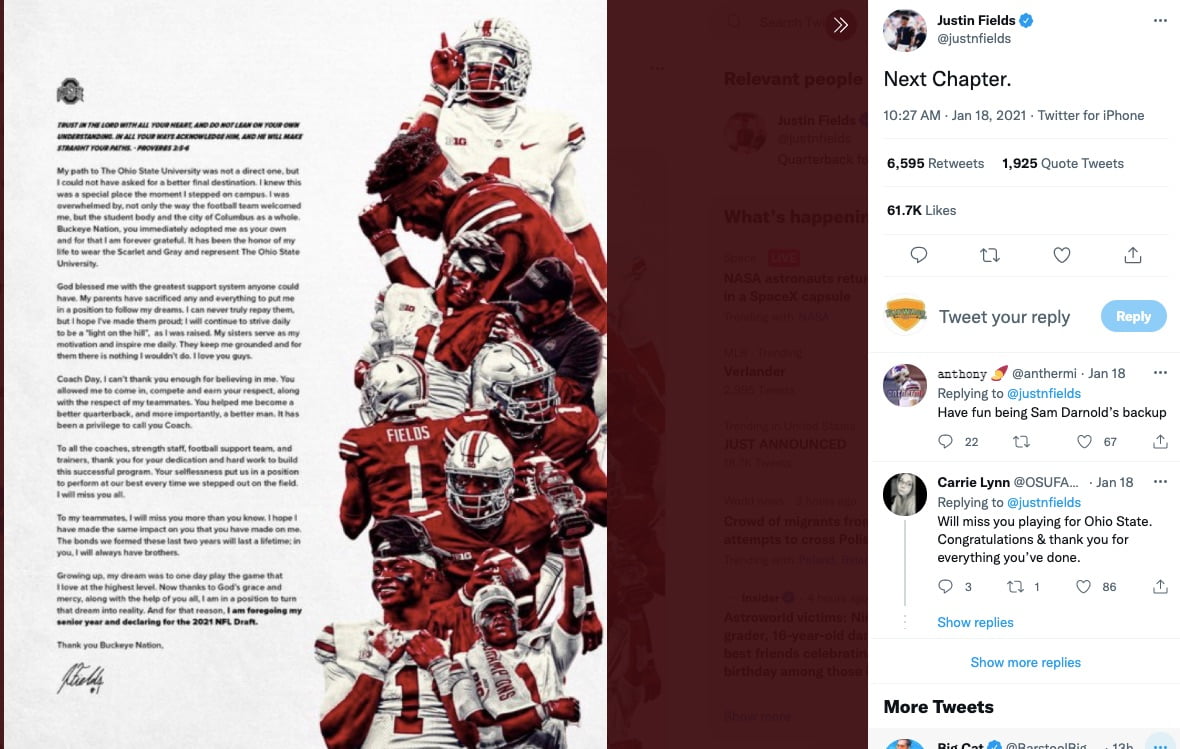 The Chicago Bears traded their r the 20th overall pick, their fifth-round pick in 2021, and their first and fourth-round picks in 2022 in order to select Justin Fields with the 11th overall selection in the first round during the 2021 NFL draft.

As of August 2021, Justin Fields’ net worth has been estimated at $20 million. In addition to his NFL contract, Fields earns from his endorsement with Nutrabolt’s C4 Energy, Bose among others.

⚡️ WE LOCKED IN OUR QB⚡️ @justnfields X C4

We are STOKED to welcome Justin to the #TeamC4 roster! He makes big plays happen for a living and we can’t wait to see him thrive in the league. https://t.co/5xI1alraPe pic.twitter.com/GkWyGqVEdH

In addition to his endorsement deal with C4 Energy, Fields has deals with the PlantX The website, Chipotle, Bose, Oakley, and Wonderful Pistachios.

Justin Fields’ jersey is available for $119.99 at the Chicago Bears shop; you can also find it at ’s Sporting Goods, Fanatics, the NFL Shop, and certainly at Amazon. 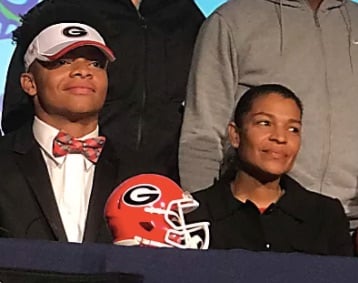 She is a project manager at Fleetcor; she first joined Fleetcor in January 2009, as a sales manager.

Prior to that, Mrs. Tobey was a sales manager for DHL and had the same working position when she worked for MCI between September 1999 to October 2005.

Justin’s mom graduated with a Bachelor’s Degree in Vocal Performance with an Opera emphasis from the Boston Conservatory at Berklee in 1992.

Gina lives in Norcross, Georgia. She shared her opinion when Justin first committed to the University of Georgia a few years back.

“I think that they were the best,” Gina Tobey said on his commitment day. “To be honest with you, but I haven’t been on all the visits. But I had been on enough. … I went to Alabama last weekend.”

“Keep in mind that we had done a lot of unofficial visits, tons of them,” she said. “We went to so many different schools. We went to Duke and Tennessee. And we went to Auburn, FSU and Florida. The only difference if we would have kept going on more official visits is that they would have been paying for it.

“Georgia just seemed to have the overall best plan and best programs in place to help Justin succeed.” 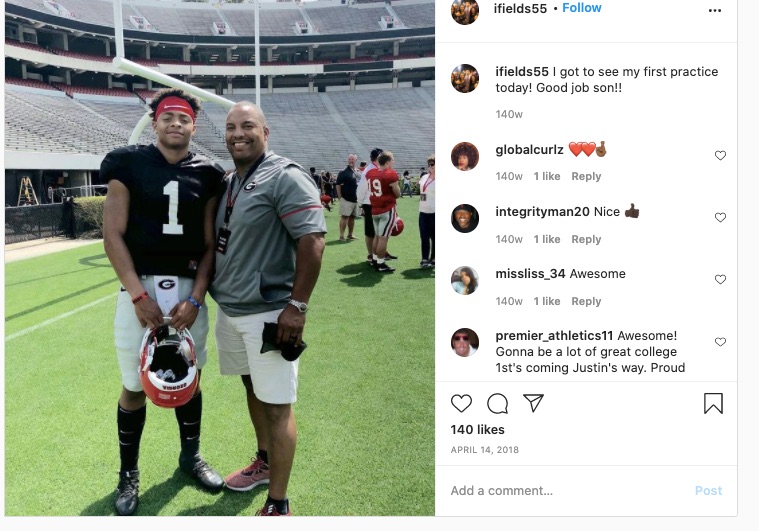 Justin’s dad, Ivant a former linebacker at Eastern Kentucky University, then a student at Luther Rice University is nowadays a Resource Officer at the Atlanta Public Schools, he previously was a policeman for the City of Atlanta Police Department. Mr. Fields originally from Louisville, graduated in 2007, from Luther Rice University

Justin’s dad takes care of everything related to his children’s athletic careers, Justin in football, Jaiden in softball, and Jessica the youngest in basketball.

He knew moving to Ohio, would be tough on Justin, but showed his support for his son’s decision.

“It was rough at first, just coming here,” his father, Ivant “Pablo” Fields said before adding

“He is where he’s supposed to be, I really believe that,”

“And, I think he was where he was supposed to be last year.” 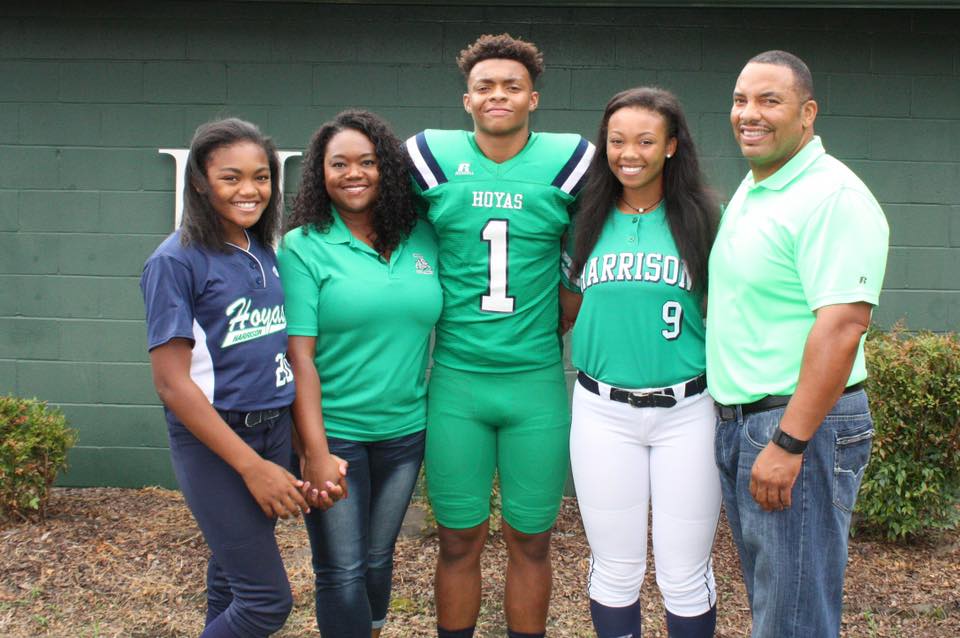 While Justin didn’t have older or younger siblings from his mom Gina’s relationship with his dad Ivant; he got to enjoy the whole big brother’s experience when his dad Ivant Fields and step-mother stepmother Jo-Ann tied the knot.

Furthermore, Ivant Fields’ wife is personal injury attorney Jo Ann Claudrick Fields, mother of his youngest daughters, 5’9 Jaiden (b. September 22, 2000) a softball player at the University of Georgia who is pursuing a major in journalism. 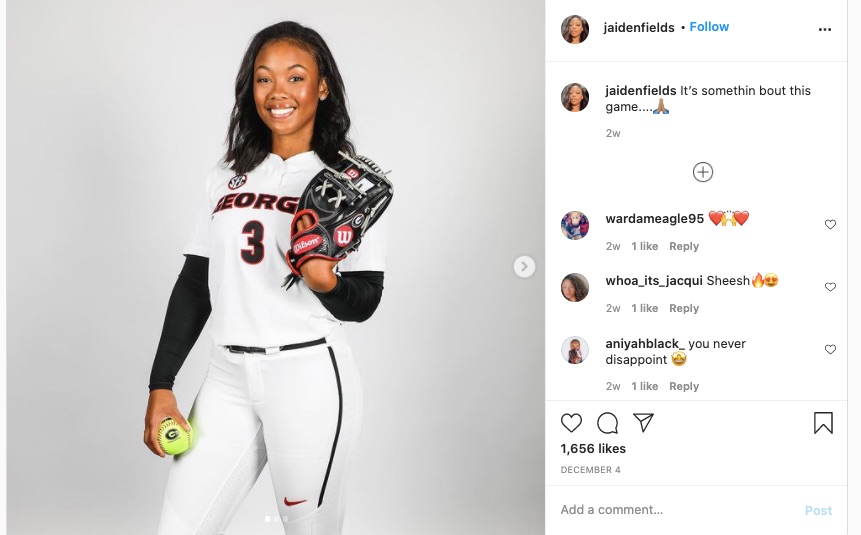 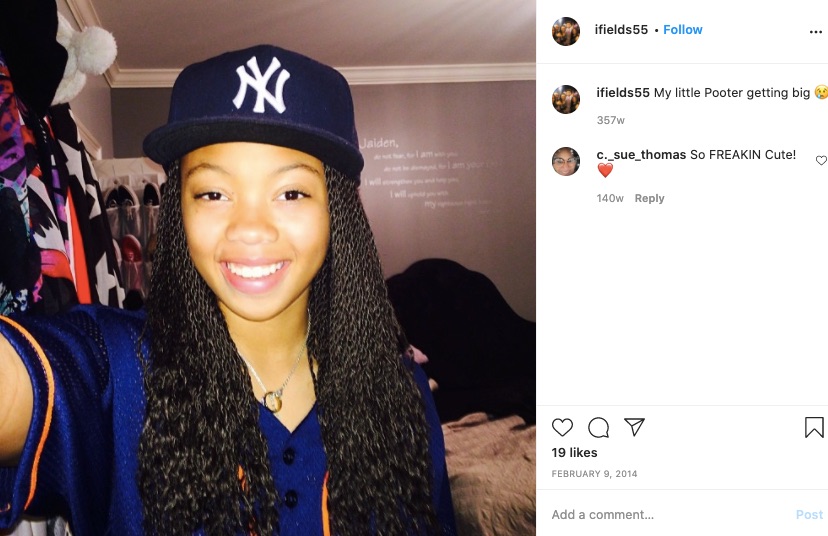 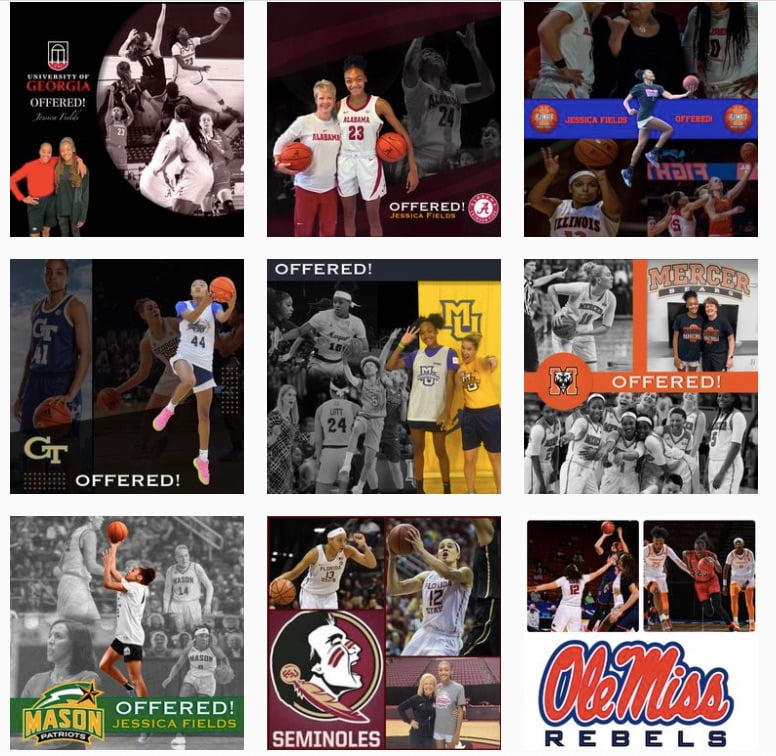 The Chicago Bears quarterback, Justin Fields doesn’t have a girlfriend at this moment, and if he does, he is way too good at keeping his personal life out of the public eye.

What kind of dog does Justin Fields have? 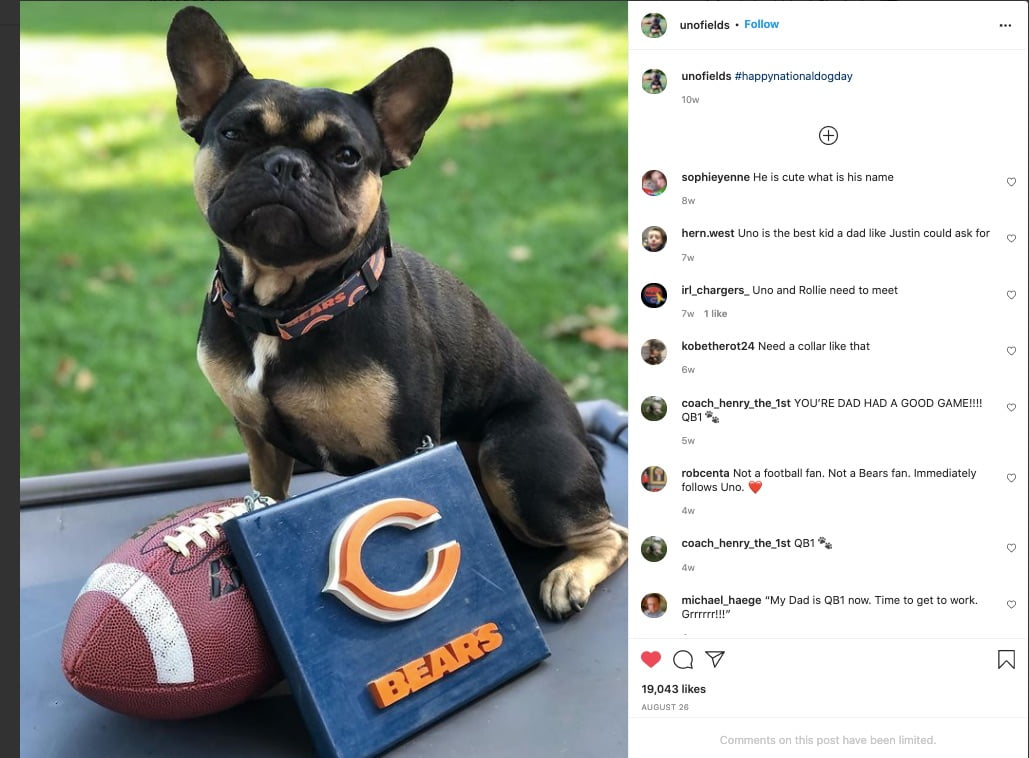 In May 2020, Justin Fields spoke about trying a plant-based 28-day detox. Fields added that a plant-based lifestyle helps his body become stronger and speed the healing process.

Being plant-based speeds up the healing process,” said Fields.

“Before I moved to plant-based, I would kind of be a little bit constipated. I didn’t take a number two as often as I do now. After the 28-day period, I liked the results that it gave me physically but also internally and how it felt inside,”

“Science proves that being plant-based and eating those things heals your body faster and helps your body recover. My job is to invest in my body. Keeping your body healthy is the number one thing. If your body isn’t healthy, then you’re not getting the full potential out of yourself.”