Meet Kate Phillips also known as Kate Rose; she is the very proud wife of Justin Rose. Her husband is the English28 the golfer who won the 2013 US Open at the Merion Golf Club in Ardmore, Pennsylvania, defeated Phil Mickelson and Justin Day.

If the maiden name of  Justin Rose’s wife rings any bells it is because back in the 90’s Kate Phillips was a competitive acrobatic gymnastics in the UK who took the gold home several times, the young gymnast was a straight a student at Godolphin and Latymer Upper School for Girls and the University of Sussex.

She put gymnastics behind her when she became an IMG agent representing Justin Rose, the lovebirds moved in together and Kate decorated their love nest in Putney, a suburb in London she became Kate Rose when she got married to the promising golfer from South African in December 2006. 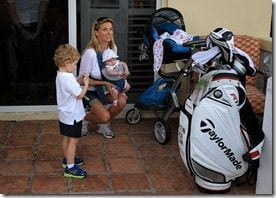 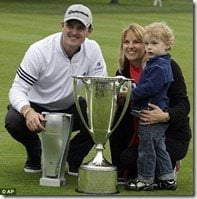 When she is not busy with her children at home and supporting her hubby in the golf course; Kate Rose is working at the Kate and Justin Rose Foundation created to improve the life of underprivileged children.

Kate is also a supporter of both the Cancer and Leukemia Association; she lost her mother to breast cancer and Justin’s mom lost her battle with Leukemia in 2002.

Justin, his wife Kate Rose moved to Orlando in 2004; they live in Lake Nona in Orlando, FL. with their beautiful children.