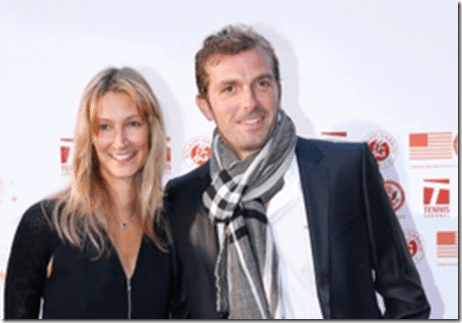 Her vet hubby was born in 1981 in Bourg-en-Bresse, Julien is part of the team of France Davis Cup since 2010, and is also renowned for his country by winning the bronze medal in doubles teamed up with Richard Gasquet, games London Olympic 2012.
Julien reached 26th in the world in singles and 15th in duplicate, with a very complete game, allowing it to be competitive on all types of surface.

There is not much information found on Karen, she seems to enjoy her low profile but she is loyal supporter to her hubby. The couple is pictured above attending the Annual Photocall for Roland Garros Tennis Players at ‘Residence De L’Ambassadeur Des Etats-Unis’ on May 24, 2013 in Paris, France.

Here are some quick facts about her hubby; Karen’s hubby started playing tennis at age four, his nickname is “Bennet” he got under his belt the US Open junior doubles title in 1999 (w/Mahut). He has revealed his tennis idols growing up were Yannick Noah and Jimmy Connors and also idolized Michael Jordan, his favorite surfaces are indoor hard courts and clay and likes to play soccer and ski in his spare time. Her man’s favorite soccer team is Olympic de Marseille. Karen’s in-laws are Andre, who works for a glasses company, and Laurence, who is a lawyer. Julien has one brother –Antoine, who also plays professional tennis; and two sisters; Dominique and Marie-Sophie.

Last year, The Frenchman ranked in Top 50 every week, reaching season-high No. 27 in March. In October in Kuala Lumpur, reached 9th career final (l. to Sousa after holding MP). Reached 3R at Australian Open and 2R at Wimbledon, also won Monte-Carlo title after saving 7 MP vs Bryans in 14-12 Match TB win. Won Washington crown and compiled records of 21-17 on hard, 3-3 on grass and 3-5 on clay. Went 2-7 vs. Top 10 opponents.