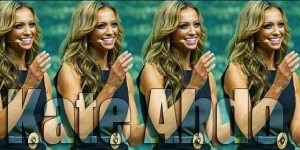 British journalist is the pretty woman chosen to host the 2015 Ballon D’ Or ceremony in Zurich, would you like to know more about her?