Meet the lovely, exquisite and beautiful Kayla Harris; she is the lucky gal dating NBA player Dewayne Dedmon. Her 7’0 stud is currently a  center player for the San Antonio Spurs; but he also played for the Golden State Warriors, the Philadelphia 76ers, and the Orlando Magic.

He also played college basketball for the Trojans at USC prior to the NBA.

Surely you already knew that, right? But I bet you know some or maybe Nada about Dedmon’s beautiful lady? Lucky for you, you landed in the right place, Fabwags can tell you what you are looking for. (Cheesy line, I know, my bad!)

26-year-old Kayla Marie Harris from Jacksonville, Florida is the eldest child of Karl Harris and Jennifer Harris (nee. Freeman). She was born on January 21, 1991. She has three younger brothers and one younger sister, who is following her steps in cheerleading. 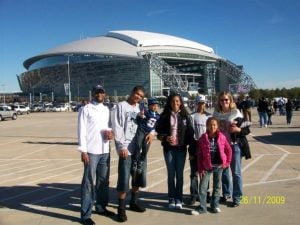 Her beautiful young sister Jasmyn is on the cheerleading squad at her high school, and Kayla was an NFL cheerleader for the Jacksonville Jaguars from 2012 to 2014.

She was among the beautiful Jaguars cheerleaders that shoot the 2014 lingerie calendar in London.

Ms. Harris graduated with a degree in public relations and communications from the University of North Florida in 2016.