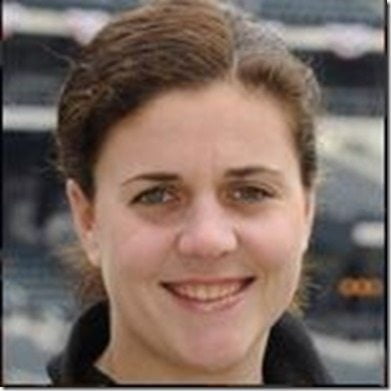 It’s appalling to think we live in a world where intelligent, capable, bright, efficient women still get fired over being pregnant and single! Meet 33-year-old Leigh Jaye Castergine, a former VP of Ticket Sales for the Mets who is currently suing the team and its Chief Operating Officer Jeff Wilpon, saying that she faced discrimination on the basis of her .

Cstergine was promoted to senior vice president for ticket sales and service operations last year, the first woman to hold such a position in the team’s 52-year history.

Reports say After Castergine complained to human resources, she was fired on Aug. 26. Wilpon said she was no longer aggressive and “something had changed” in her after the birth of her child.

Leigh can still be found on the Ticket account service team page for the Mets here; the former vice president was drafted by the Mets in 2010 the page reads. On her profile can be found her favorite Mets moment which is: “Any time the Home Run Apple rises in centerfield;” and her favorite Citi Field food: “Spicy crunchy tuna roll from Daruma Sushi.”

During last year interviews many thought she’d be the next female President in the sports industry. It didn’t take long to discover why those individuals hold that opinion. When you asked Leigh Castergine, former Vice President of Ticket Sales and Services at the New York Mets, what their 60-person Ticket Sales and Services department does, it’s quite a robust list: premium sales, season ticket sales, group sales, single game sales, season ticket account services, CRM, data analytics, and ticket operations.

According to SEAT magazine, she first became interested in the sports sector while attending the University of Pennsylvania, she was an economics major with a psychology minor and was intrigued by the analytics and data behind why people purchase consumer products. When it was time to graduate and actually find a job, a mentor at Penn told her she felt sales would be a better fit given my personality and competitive nature (Leigh played soccer at Penn).

Her first job in sports was working for the Philadelphia 76ers as an inside sales rep making $6 per hour with no health benefits. Prior to her role with the Mets, she worked at Dnc-boston, Boston Professional Hockey Association, Inc.

In a statement released to Fred Kerber of the New York Post, the Mets confirmed the recent whispers that Leigh Castergine, senior vice president of ticket sales had been fired.

Leigh leaves an indelible mark on the organization as she was the force behind modernizing the Mets ticket operations by ushering in dynamic ticket pricing while it was still in its infancy – a growing trend that has since been adopted by many other major league teams.

She also had an acute awareness of her marketplace and the ticket environment as a whole, confronting the ever-growing secondary ticket market head-on by offering ticket buyers more value for their dollars in the form of Summer Concerts, Free-Shirt Fridays, Family Tickets, and other unique promotions geared toward customer satisfaction and consumer value.

Unfortunately for Leigh, and despite all her best efforts, she could not overcome the fact that more and more fans were becoming disinterested in the primary product she was trying to market – a lackluster team who hasn’t had a winning season since 2008.

Castergine, who became a mother this year after the birth of her first child on Opening Day, will bounce back and reappear somewhere. There’s always a need for talent like hers in the sports industry, and after successful stints with the Orlando Magic in the NBA and the Boston Bruins in the NHL, it won’t be long until she’s called upon by another team.

Any thought on her situation?