After so much speculation Golfer Tiger Woods and Skier Lindsey Vonn have confirmed their relationship, no more gossip, both revealed how their close friendship took them from one thing to another, plus we have their first portraits together.

37-year-old Tiger Woods went thru one of a ride a couple of years ago when his multiple extramarital relationships with way too many women was revealed, this terrible mistakes not only affected his career but destroyed his marriage to Elin Nordegren.

As for 28-year-old Lindsey Vonn an Olympic Ski racer who split from her husband of 10 years last November, isn’t having the best time in her career as the moment, she tore tore her anterior cruciate ligament and medial collateral ligament in her right knee, with a tibial plateau fracture at the 2013 World Championships in Austria.

it seems that these two  are no longer worrying about that, both have been seen together for the past weeks, media soon began to  speculate about the possibility they were dating, they were sort of careful not have any paps taking their photos together, but now it is time for them to give the world a big announcement, not that we didn’t know, but it is good to hear it from them..

That was what Woods posted on his Facebook wall, some readers congratulate him, other warned Lindsey and others made jokes out of it. 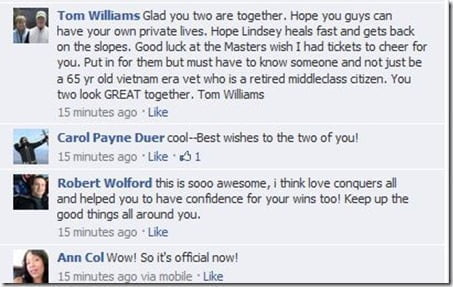 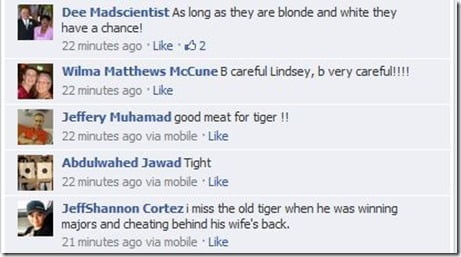 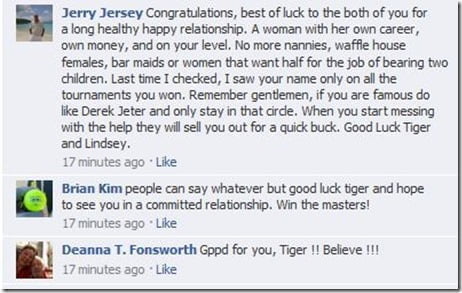 And this is what Lindsey posted 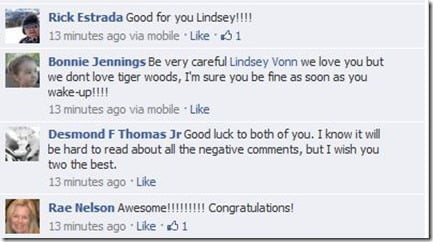 There are the official photos of Lindsey and Tiger together as a couple, I bet we better get use to see these because we will be seeing them pretty frequently.