Meet Mariana Vicente; she is the stunning wife of MLB player Enrique Hernandez, the Puerto Rican utility player for the Boston Red Sox, who previously played for the Los Angeles Dodgers, Marlins and Astros. Mariana is no stranger to stardom, after all, she is a model-actress and Miss Universe Puerto Rico 2010.

As of July 2021, Kike Hernandez’s net worth has been estimated at

Kike Hernandez and his wife Mariana Vicente met after he watched her on the film Hot Tub Machine 2 and looked her up on social media. A couple of months later they had lunch together, one thing led to another, they started dating six months after they met and the rest as you all know is history.

“He found me on social media and sent a message congratulating me on my performance,” she smiles. Mariana commented about Kike contacting her for the first time.

He was impressed by her looks, but even more by her personality.

“She was as beautiful in person as she was in her modeling pictures,” “I turned around and he was on one knee,” she remembers of the intimate proposal. “Also, I got it all on that Snapchat video… which, I deleted by mistake.”

“We also knew they would probably travel exclusively for our wedding day and would have to leave quickly, so it was a priority to show them as much of a ‘Puerto Rican experience’ as possible. I was very happy with our choice of locations because they brought together all the elements that I feel describe the island best: our beautiful ocean, history, and culture!” 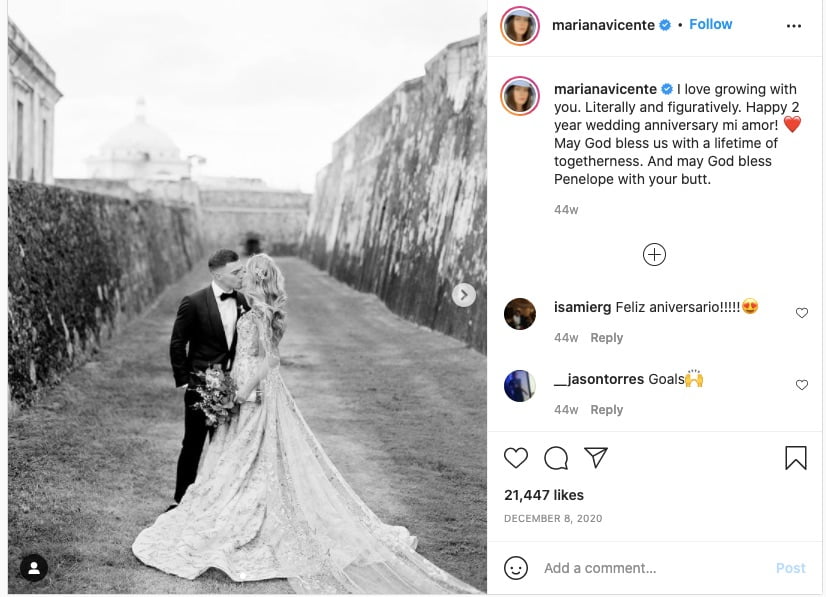