Meet the lovely Netta Brielle; she is the longtime girlfriend of NFL player Marshawn Lynch, the running back for the Oakland Raiders who has been quite successful keeping his personal life private; however, Terez Owens discovered Lynch and Netta have been dating for quite some time.

Netta Brielle the R&B/ soul singer from Oakland, California is according to recent reports the longtime girlfriend of Beast Mode; Ms. Brielle born in Berkeley, CA. She started performing at the age of five; she listed MC Hammerand TuPacg as her personal influences. Netta graduated from San Jose State University in Musical Theater.

Although she is an Oakland gal, she doesn’t have any photos that suggest she is a Raiders fan, however, she sure likes the Golden State Warriors. 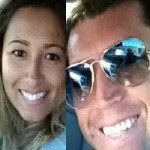 From the waters of the Mediterranean Sea, 31-year-old tennis player Flavia Pennetta has put the name … END_OF_DOCUMENT_TOKEN_TO_BE_REPLACED